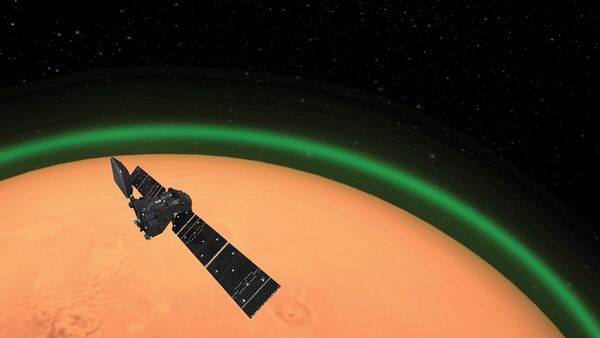 Entire regions of the Martian sky have been observed glowing in vibrant ultraviolet light, NASA revealed in a press release.

The pulsing light, known as "nightglow" and first identified by the MAVEN spacecraft, follows a set pattern, becoming visible three times a night and throughout the red planet's spring and autumn.

It’s not a strobe light at a nightclub, but data from the @MAVEN2Mars spacecraft reveal that the Martian sky pulses in ultraviolet light at night. The results are being used to illuminate complex circulation patterns in the Martian atmosphere. 🕺 https://t.co/LEzT2Lo1gW pic.twitter.com/Xlw2JjbM7K

​​Strange waves and spirals can also be seen over Mars's winter poles, as revealed by new data published on 6 August in the Journal of Geophysical Research.

"Maven's images offer our first global insights into atmospheric motions in Mars' middle atmosphere, a critical region where air currents carry gases between the lowest and highest layers," said Nick Schneider from the University of Colorado's Laboratory for Atmospheric and Space Physics (LASP), and the primary author of the research.

The lights take place when winds carry gas located in the higher regions of the planet's atmosphere to lower, more dense parts, which leads to an increase in chemical reactions that form nitric oxide and cause a bright ultraviolet glow captured by spacecraft instrumentation but not visible to the human eye.

"Unfortunately, the composition of Mars' atmosphere means that these bright spots emit no light at visible wavelengths that would allow them to be seen by future Mars astronauts".

Milby noted that bright patches "would intensify overhead every night after sunset, and drift across the sky at 300 kilometers per hour (about 180 miles per hour)".

​The pulsations are evidence that waves observed in the middle atmosphere align with those already known to exist in the above and below layers, showing how gas circulates across the entire Martian world, from the planet's surface to the edge of space.

Light waves that encircle the planet are key to its atmosphere, indicating that it is influenced by daily heat patterns from the sun and disturbances from below, including gigantic volcanic mountains.

Researchers are now looking to observe a side-on view of the planet, instead of using imagery from directly above, which would provide a better understanding of vertical winds and seasonal changes that cause the ultraviolet glow.