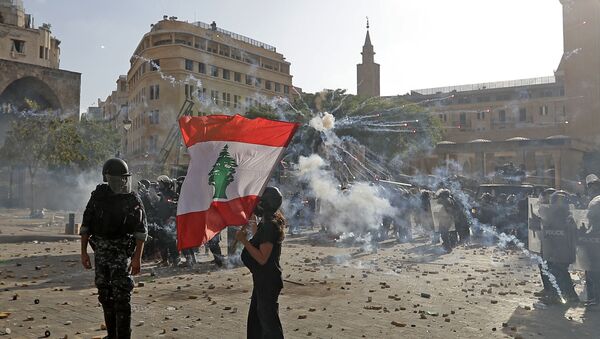 Subscribe
International
India
Africa
Thousands of protesters clashed with police in Beirut during the mass riots over a massive fertilizer explosion, which has been blamed on corruption. The gathering demanded reforms and a resignation of the government. The riot led to hundreds suffering injuries, including 100 security officers.

Lebanese Prime Minister Hassan Diab on Monday announced the resignation of the government in the aftermath of the devastating August 4 Beirut port explosion.

The announcement comes after a number of high-profile resignations from the cabinet and parliament as citizens’ anger seethed over the Beirut port explosion.

BEIRUT (Sputnik) - The Lebanese military on Monday drove out all the protesters from the central squares and streets adjacent to the parliament in Beirut, a Sputnik correspondent reported from the scene.

Demonstrators gathered in Beirut’s downtown area attempting to break heavy barricades in the roads and alleyways leading up to the parliament building.

Around the same time as Prime Minister Hassan Diab was announcing the government’s resignation, the gathering quickly turned into skirmishes, with protesters pelting stones and firecrackers and law and law enforcement replying with tear gas.

Additional military reinforcement was needed to drive out the protesters from the central Martyr’s Square.

The deadly explosion that rocked the Lebanese capital of Beirut highlights the need to urgently act on the oil-laden tanker abandoned off the Yemeni coast, UN spokesperson Stephane Dujarric said in a press briefing on Monday.

“The tragedy that we saw in Beirut last week clearly underscores the urgency of resolving the ongoing threat posed by the Safer oil tanker, which is anchored off the coast of Yemen,” Dujarric said. “A major spill will be catastrophic for the environment, and would destroy livelihoods of coastal communities in Yemen.”

The decaying tanker, which is loaded with 1 million barrels of crude oil, has not seen any adequate maintenance since 2015. After seawater entered the engine compartment of the vessel in May, a temporary fix was applied.

However, the spokesman said, the damage could potentially destabilize the entire tanker and release all of the oil into the Red Sea.

The spill would directly impact as many as 1.6 million people, causing catastrophic humanitarian and environmental effects to the area around the port of Al-Hudaydah, which is vital for millions of Yemenis who depend on humanitarian aid and commercial imports, according to the United Nations.

Riots continue near the Lebanese parliament in #Beirut despite the resignation of the governmenthttps://t.co/SNbxcYghiN pic.twitter.com/uwEGVHtpri

Demonstrators in central Beirut started to throw stones and firecrackers at the police officers, who responded with tear gas as anti-government protests entered the third day in a row, a Sputnik correspondent reported from the scene.

Meanwhile, Lebanese Prime Minister Hassan Diab announced the resignation of his government over the deadly August 4 Beirut blast which sparked the public outcry.

Several ministers have already announced their resignations prior to Diab’s announcement.