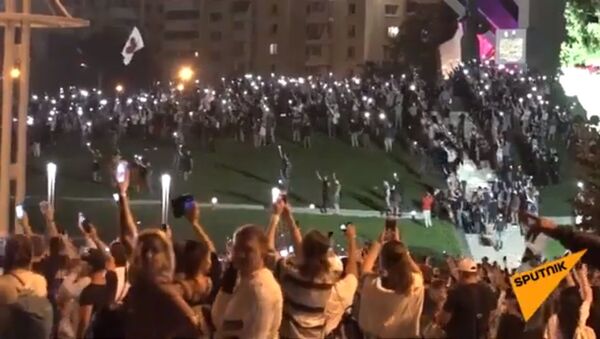 MOSCOW (Sputnik) - The protests in Minsk were provocative in nature and by no means could indicate unreliability of the Belarusian presidential election results, Russian lawmaker Oleg Melnichenko, the coordinator of the Interparliamentary Assembly of Member Nations of the Commonwealth of Independent States group of international observers, said.

As soon as polling places closed, opposition activists claimed that the vote had been rigged and took to the streets to protest the results, accordinh to CIS observers.

"The protests were clearly provocative and said nothing about the unreliability ... There were no troubles. The authorities worked very urgently and accurately. The Maidan attempt has failed," Melnichenko said.

He added that the observers faced no troubles with the movement or communication during the overnight riots.

Another member of IPA CIS group of observers, Alexander Bashkin, assumed that mass protests in Minsk could have been orchestrated by a third country.

Grigory Rapota, the state secretary of the Union State of Russia and Belarus, said on Monday that no violations of the law were registered in the Belarus' presidential election.

"We have not recorded any violations of the law in the election ... No violations have been recorded regarding implementation of the law and constitutional regulations," Rapota said, adding that Union State observers agree with the conclusions of the Commonwealth of Independent States' observers.

Rapota praised the high level of organization of the presidential vote.

Sergey Lebedev, the head of the observers mission from the Commonwealth of Independent States to the presidential election in Belarus, said on Monday that the vote had been conducted in an open, lawful and competitive manner.

"The August 9 election was conducted in compliance with the constitution and electoral code of Belarus. It was open and competitive and ensured that Belarus citizens could freely express their will," Lebedev said at a briefing.

The preliminary results of the Belarusian presidential election, held this past Sunday, suggest incumbent president Alexander Lukashenko won over 80 percent of the vote.

Earlier in the day, the Belarusian Investigative Committee opened a criminal probe into mass protests, which broke out following the presidential election, and violence against police officers. In the Belarusian capital, demonstrators used dumpsters to build barricades and threw firecrackers at police officers. The law enforcement officers responded with tear gas, water cannons and stun grenades.

According to the Investigative Committee, dozens of police officers were injured, as protesters attacked them using trash bins, sticks, stones, fragments of paving slab, glass bottles and highly inflammable liquids.