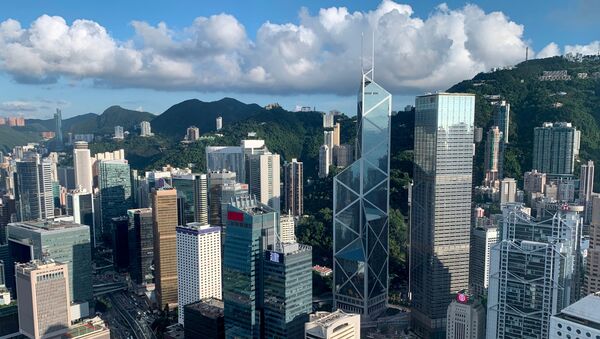 BEIJING (Sputnik) - The joint statement of the foreign ministers of Australia, Canada, New Zealand, the United Kingdom and the United States on Hong Kong is yet another instance of interference in China's domestic affairs, the Chinese embassy in Canada said in a statement on Monday.

"On 9 August, the foreign ministers of Canada and other countries made a statement which once again contained irresponsible comments on the Hong Kong affairs and amounted to gross interference in China's domestic affairs. China expresses its strong dissatisfaction and firm opposition to this," the Chinese embassy said.

Postponing the elections was out of public health precautions amid the pandemic, while the security law closed security gaps in Hong Kong that could otherwise jeopardize the region's long-term peace and security, the statement read, reiterating the rationale that Beijing has consistently confronted to similar accusations.

The embassy further called on the five signatory countries to "immediately stop interfering in China's domestic affairs and use Hong Kong as a tool," emphasizing that Hong Kong is a subject of China's jurisdiction.

On Sunday, US State Secretary Mike Pompeo and his counterparts from Australia, Canada, New Zealand and the UK made a statement condemning the new security law in Hong Kong as infringing on the special administrative region's rights and freedoms. The five foreign ministers also urged the Hong Kong authorities to conduct the recently-postponed legislative elections as soon as possible and let disqualified pro-democracy candidates run in the campaign.

The Hong Kong elections were initially scheduled for 6 September. In late-July, the government postponed the vote, citing coronavirus-related risks. Additionally, several candidates, considered pro-democracy, were banned from running on the grounds that their political activities were inconsistent with the new security law.

The Chinese government enacted the law on 30 June, following a little more than a month-long review at the National People’s Congress. The law adjusts security policies in Hong Kong to Beijing's perception of crime and punishment with regard to separatism, subversion, terrorism and collusion with foreign countries. The Western critics of the law fear that it might painfully limit Hong Kong's exclusive rights and freedoms, which it was guaranteed under the 1984 UK-Chinese agreement.