On Anniversary of US Bombing, Nagasaki Mayor Calls for Nuclear Weapons Ban 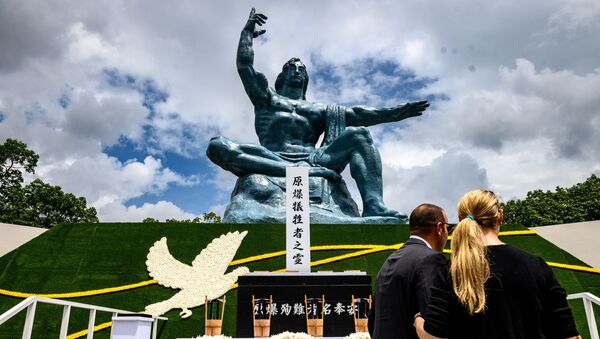 © AFP 2021 / Philip Fong
Subscribe
The United States dropped two atomic bombs on Japan in August 1945: one on Hiroshima and one on Nagasaki. To date, these have been– the only times nuclear weapons were used in warfare. Japan has yet to vote on or ratify the international Treaty on the Prohibition of Nuclear Weapons.

Speaking at a ceremony dedicated to the 75th anniversary of the US atomic bombing of the city on Sunday, Taue lamented that states possessing nuclear weapons have been backtracking on their promise regarding nuclear disarmament.

He mentioned the US unilateral withdrawal from the Cold War-era INF Treaty with Russia and efforts to develop smaller nuclear weapons.

“As a result, the threat of nuclear weapons being used is increasingly becoming real,” the mayor stressed.

He then called on the Japanese government to sign the Treaty on the Prohibition of Nuclear Weapons and “see to its ratification” as early as possible, as well as to consider establishing a nuclear-weapon-free zone in Northeast Asia.

The treaty was adopted in 2017 by 122 United Nations member states, although none of the states with nuclear weapons voted for it. The Netherlands was the only NATO member to vote and the only state to vote against the agreement. Currently, 82 nations have signed the pact and 44 have ratified or acceded to it.

Japan, which relies heavily on the nuclear-armed United States for its protection and is worried about the threat posed by North Korea’s obscure nuclear programme, has chosen not to sign the agreement.

Prime Minister Shinzo Abe himself has opposed a global nuclear weapons ban, though he insists that his government shares the goal of eliminating nuclear weapons.

Earlier this week, the mayor of Hiroshima asked Tokyo to join the treaty in a ceremony attended by bomb survivors, known in Japan as “hibakusha”.

On 9 August 1945, a US warplane dropped a plutonium-239 bomb over Nagasaki, which killed around 74,000 people. Another nuclear bomb dropped on Hiroshima three days earlier killed 140,000 people. Both numbers are estimates due to the protracted impact of the bombings. These two events remain the only times a nuclear weapon has been used against a foreign state.

000000
Popular comments
I second that motion, Nuclear weapons are not a weapon anyone should have. No one can really win a nuclear war, so let's just get rid of them completely.