Libya’s Top Oil Official: Bigger Disasters Than Beirut Blast May Be on Their Way 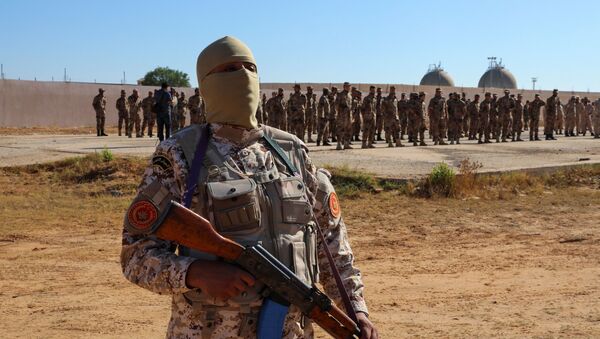 © REUTERS / Ismail Zitouny
Subscribe
The Tripoli-controlled oil corporation says it has incurred losses worth billions of dollars due to Marshal Haftar’s protracted blockade of key terminals and the shutdown of major pipelines.

Libya may face more disastrous events than the explosion that devastated Beirut this week, the North African country’s top oil official has warned.

“The militarisation of oil facilities, the presence of mercenaries as well as the military escalation increase the risks that hydrocarbons and chemicals stored at oil ports pose to workers and the local population,” Mustafa Sanalla, chairman of the state-run National Oil Corporation, said in a statement on Friday.

He said this could lead “to a disaster that is severer than [the one in] the Port of Beirut and a massive destruction that will cause Libya to be out of the oil market for so many years.”

A massive blast ripped through Beirut, the capital of Lebanon, on 4 August, killing at least 159 people and wounding thousands. Authorities blamed the explosion on poorly stored ammonium nitrate; the incident caused widespread anti-government protests and raised the possibility of an early election.

Sanalla estimated the potential lost opportunities from a potential disaster in Libya would cost the country hundreds of billions of dollars that would go to other oil-producing countries. “Furthermore, tens of billions will be needed for reconstruction at a time when budgets available are limited,” he added.

Libya has been in the throes of political instability and violence ever since the overthrow of its leader Muammar Gaddafi in a US-backed uprising in 2011.

The National Oil Corporation (NOC), controlled by the UN-backed Tripoli government, claims that mercenaries from Russia and Syria are fighting alongside the Libyan National Army led by Marshal Khalifa Haftar, a military commander allied to a rival government based in the east.

President Vladimir Putin conceded this January that there might be Russians fighters in Syria, but rejected accusations that they are acting on Moscow’s behalf. Russia does not support any side in the conflict and has called for national reconciliation in Libya.

Khaftar, who has been trying for more than a year now to seize Tripoli, has maintained a blockade on oil exports from key ports since mid-January, saying he wants fair distribution of the revenues managed by Tripoli.

There were signs that the blockade could be lifted last month, but Haftar stepped back from negotiations and ordered it to continue, following orders from the UAE, according to the NOC.