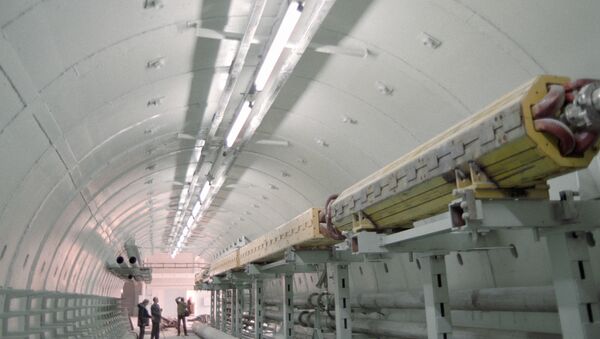 © Sputnik / Валерий Шустов
/
Go to the photo bank
Subscribe
Ilya Tsukanov
All materialsWrite to the author
The European Organization for Nuclear Research completed the Large Hadron Collider (LHC) – the world’s largest and most powerful particle accelerator, in 2008. However, buried underground near a town outside Moscow are the remnants of a little known, but no less ambitious project which would have rivaled the LHC’s immense scale.

For much of the Cold War, Soviet, European and American scientists raced to build more and more powerful particle accelerators to carry out important experiments in nuclear and particle physics, with the complicated and costly ring-shaped machines using electromagnetic fields to propel charged particles to extremely high speeds and energies and smash them into one another to enable scientists to obtain crucial information in the fields of fundamental sciences, but just as importantly, practical data for research into industrial processes, radiotherapy, biomedicine, X-rays, and much, much more.

Work on the creation of colliders began almost simultaneously in the late 1950s at laboratories in Frascati (Italy), the Stanford Linear Accelerator Center in California, and the Budker Institute of Nuclear Physics in the Siberian town of Akademgorodok (literally ‘Science Town’) outside Novosibirsk.

Between the early 1960s and the mid-1980s, ever more powerful colliders were built in France and Italy, Siberia, California, Massachusetts, Illinois, Germany, and Japan. Between 1963 and 1974, Soviet physicists built three major colliders – the VEP-1 (‘VEP’ being the Russian acronym for ‘Colliding Electron Beams’), the VEPP-2 (the second P is for 'Positron') and the VEPP-2M. 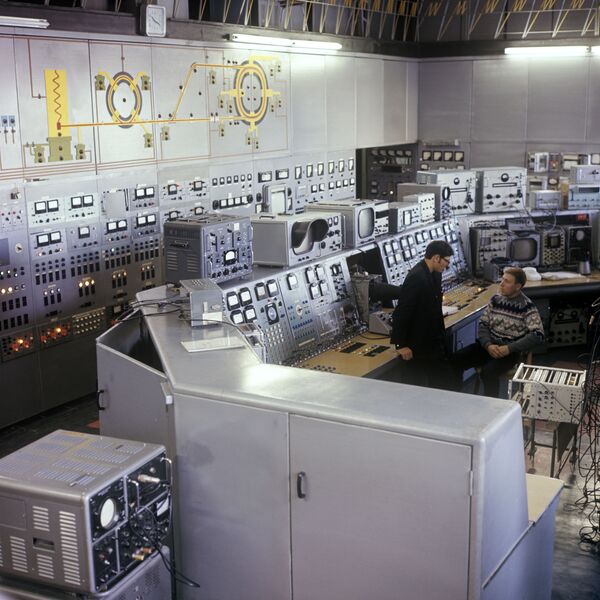 Control room at the VEPP-2 facility at the Institute of Nuclear Physics of the Siberian Branch of the Soviet Academy of Sciences. 1973.
© Sputnik / А. Лобов
/
Go to the photo bank

However, as the 1980s rolled around, Soviet efforts seemed to be slowing down. As other countries inaugurated new particle accelerators taking advantage of the information technology revolution, Soviet scientists were stuck with 1970s technology which, although revolutionary at the time of its creation, could no longer on its own meet physicists increasingly ambitious demands.

In 1983, the government stepped in and approved a new project – the ‘Accelerator-Storage Complex’, or UNK, a massive scientific facility featuring a 21 km long main tunnel (for comparison, the LHC’s tunnel is 27 km in circumference), dozens of support buildings and the capability to provide researchers with up to 3,000 Giga-electron-volts (GeVs) of power, i.e. about three times that of the Fermi National Accelerator Laboratory outside Chicago, Illinois, the most powerful particle accelerator in the world at the time. 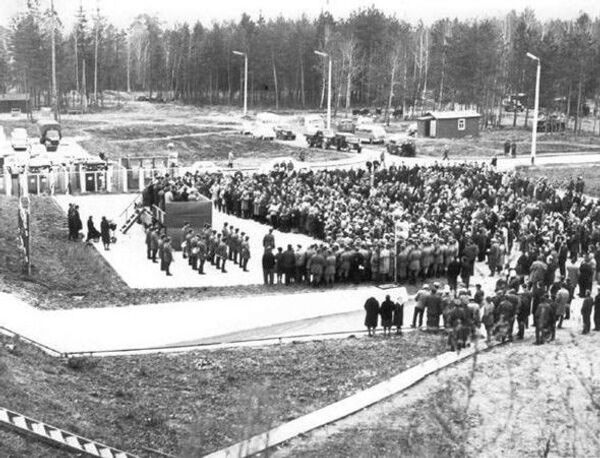 About a billion Soviet rubles were poured into the project, and construction of the UNK began about 100 km southwest of Moscow at the Institute for High Energy Physics in Protvino, a major scientific center which gained international prominence in the physics community in late 1960s after building the U-70 proton synchrotron with the ability to generate proton energy of 76 GeV, a world record at the time.

According to the plan, the U-70 would have been used for the first accelerating stage, with the 21 km-long tunnel to have an inner diameter of 5 meters and be situated between 20-60 meters underground. At intervals of approximately every 1.5 km, massive underground halls containing instrumentation equipment would be placed, with these areas connected to the surface using vertical shafts used for wiring, transport, and other purposes. 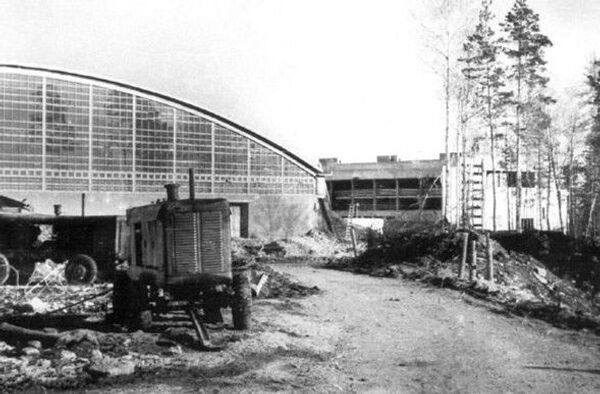 Between 1983 and 1986, work proceeded at a snail’s pace, with only about 1.5 km of the tunnel complex built. In 1987, construction was intensified dramatically, and in what was an unprecedented step at the time, the USSR bought a pair of modern tunnel boring machines from Canadian company Lovat to help in the process.

By 1989, about 70 percent of the main tunnel ring and over 95 percent of the secondary 2.5 km long ‘injection tunnel’ meant for the transfer of particles from the U-70 to the UNK were completed, with three of the planned 12 engineering support buildings finished and over twenty multi-story industrial buildings connected to communications and utilities begun. Thrilled by the accelerated progress, physicists from the Institute hoped to get the facility up and running and carry out their first experiments by the mid-1990s. 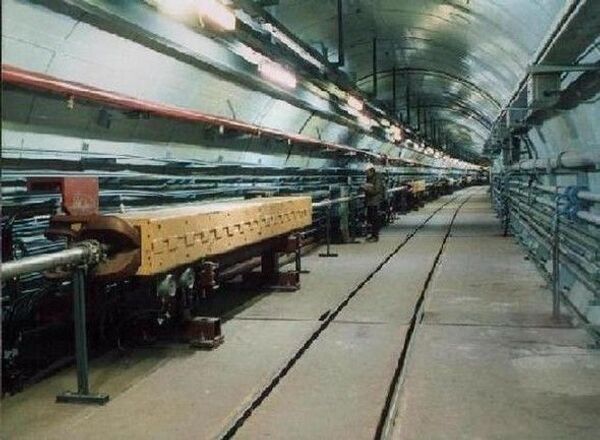 Unfortunately, it was at this time that the project began to run into financial difficulties, with bungled economic and political reforms, combined with the loss of many of the USSR’s Council for Mutual Economic Assistance allies, leading to a virtual freeze in funding.

The collapse of the Soviet Union in December 1991 seemed destined to seal the UNK’s fate completely. However, the new government soon calculated that the cost of mothballing the unfinished ring would have been too high, while destroying it by flooding would have posed a threat to the local ecological balance. So, for the next three years, construction continued, and the main tunnel was finally finished in late 1994. Ultimately, the more costly and material-intensive technical components proved to be impossible to complete. For instance, only a few dozen of the 2,500 10 tonne apiece superconducting magnets were delivered for installation.

In 1998, the same year that CERN began construction of the LHC, Russia defaulted on its foreign debts, and the UNK project was closed for good. The main tunnel remains preserved in a mothballed state, and contains functioning emergency lighting and ventilation, with groundwater pumped out to prevent tunnel collapse.

CERN signed a cooperation agreement with the Institute of High Energy Physics in 1993, and as many as 700 Russian scientists (and many more from other former Soviet republics) ultimately ended up taking part in the construction of the $4.75 billion LHC project. 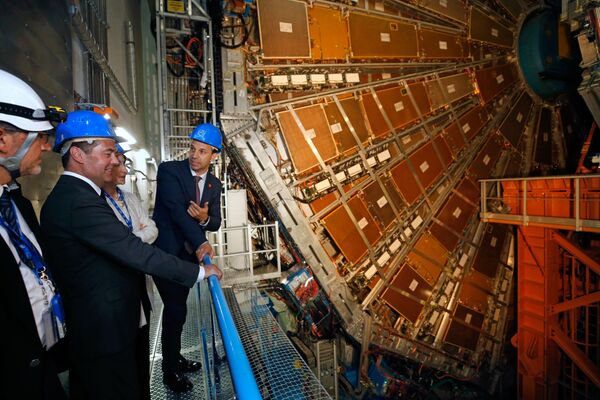 The UNK project had a website, www.oku.ihep.su, although it is believed to have been lost. Fortunately, snapshots of the site, complete with photographs of the project at various stages of construction, can be found using the Wayback Machine.

The unfinished UNK facility continues to be a source of fascination for ‘diggers’, thrill-seeking Russian youngsters seeking to make their way into secret underground areas. However, any adventurous wanderers out there have been warned – the facility has onsite security, and has taken active measures to stop people from ‘accidentally’ strolling into the vast unfinished underground science city.

000000
Popular comments
This is old news, about Sakharov's Tokamak built by the KURCHATOV Institute with guidance from NAZI nuclear scientists who buIlt the particle accelerator at Bissingen during WW2 Manfred von Ardenne is the grandfather of NAZI particle physics copied by the Soviets & copied by CERN.

Sy.Gunson. NZ
9 August 2020, 22:54 GMT3
000000
No country should underestimate Russia , it is like China , both famous for it's inventiveness on military techniques . They make a good team . Both get the blame game from the West and there is good cause . it just points to the fact that countries that criticise without reason feel insecure when weighed against more stable , cool , calm and collected competitors as named by me . Have a good day .