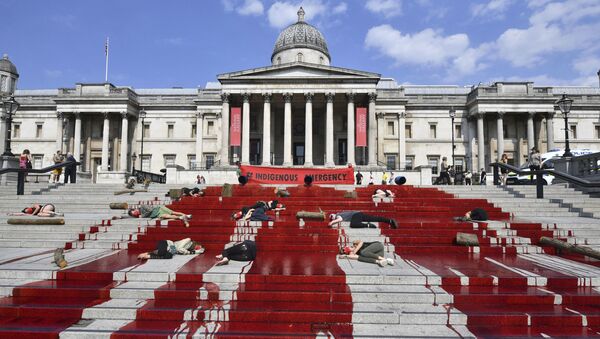 © AP Photo / Dominic Lipinski
Subscribe
Brazil has been the second worst hit country in the world by coronavirus, with over 3 million people testing positive for the virus and on Saturday the country’s death toll hit 100,000. Brazil’s indigenous communities have been gravely affected by Covid-19 with over 600 lives lost so far.

Extinction Rebellion activists in London have painted the steps of the National Gallery with red paint and have dyed the fountains in Trafalgar Square red and green in solidarity with indigenous communities in Brazil who are dying at an extraordinary rate due to Covid-19.

Brazil’s official coronavirus death toll hit 100,000 on Saturday and over 3 million people have been infected with the virus making it the world’s second worst affected country after the US.

To mark International Day of the World’s Indigenous Peoples, activists lay “dead” on the Gallery’s steps, while others held up banners reading “Genocide (equals) Ecocide” and “Indigenous Emergency.”

Across the world, indigenous communities are under attack, activists are murdered, cultures destroyed, people displaced.

​The group was joined by protesters from HS2 Rebellion, the Articulation of Indigenous Peoples of Brazil (APIB) and the Internationalist Solidarity Network.

APIB said that coronavirus threatens to wipe the entire indigenous community out with the mortality rate now double the rest of Brazil’s population.

.@Global_Witness 2019 report shows 212 land and environmental defenders were killed in 2019 – the highest number yet to be murdered in a single year pic.twitter.com/czImtCdWOA

​In a statement a spokesperson said, “To date, more than 21,000 APIB lives have been harmed by coronavirus in Brazil, with more than 600 lives lost.

"The alarming situation continues to grow more serious every day, because in addition to the threat of the virus, the threats of racism, illegal deforestation, criminal networks, mining companies, missionaries and big corporations continue to advance further into the most vulnerable territories of Brazil.”

The protestors are standing in solidarity with indigenous communities as not only are they suffering due to Covid-19, they are also at the forefront of the climate crisis and are also under threat due to deforestation.

They are asking people to paint their palms, one green and one red and to post a selfie on social media with the hashtag #IndigneousEmergency

Everyone welcome: Sunday 9th of August for an urgent call to GLOBAL action by Indigenous leaders from Brazil 🌎🌍🌏 pic.twitter.com/8MdndFLJfh

​Brazil’s President Jair Bolsonaro has been heavily criticised for downplaying the impact of the virus having described it as a “little flu.”

In memory of all of the Brazilian people who have lost their lives to coronavirus, following the record breaking numbers of deaths announced on Saturday, the non-governmental group Rio de Paz placed crosses on Copacabana beach in Rio de Janeiro and released 1,000 red balloons into the sky.