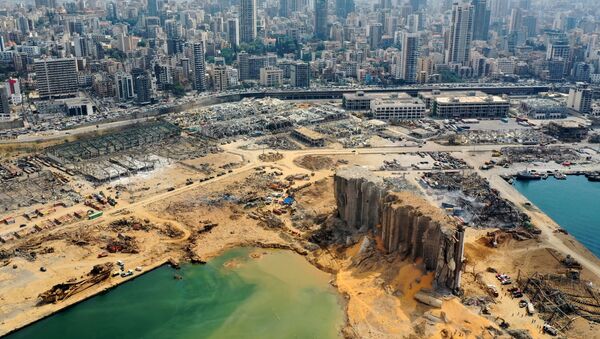 Days after the deadly explosion in Beirut that killed over 150 people and transformed the bustling city into a pile of rubble, reports have traced the origin of the ammonium nitrate, implicated in the blast and stored at a port warehouse, to a vessel that docked there years ago, “The Rhosus”.

The huge chemical blast that hit Beirut's port, turning swathes of the Lebanese capital into rubble and claiming over 150 lives, left a 43-metre (141 foot) deep crater, a security official was quoted by AFP as saying on Sunday, citing reports by French experts carrying out an assessment of the disaster area.

The explosion, which occurred on 4 August and was felt across the county, was recorded by the sensors of the American Institute of Geophysics (USGS) as having the power of a magnitude 3.3 earthquake.

According to the investigation into the deadly incident, it was triggered by a fire in a port warehouse, where a huge shipment of a volatile chemical, ammonium nitrate, used as a high-nitrogen crop fertiliser, but also a component in explosives for mining and other industries, had languished for years. 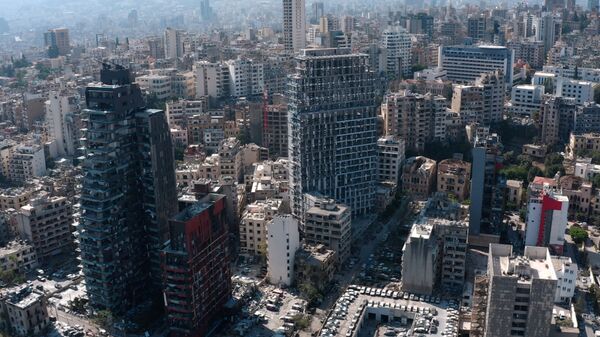 The deadly blast also wounded at least 6,000 people and displaced more than 300,000 from their homes.

Earlier, reports emerged tracing the chemicals that had languished for years at the port warehouse to “The Rhosus," a vessel that made a stop at Beirut seven years ago.

According to The New York Times, the ship, flying a Moldovan flag and owned by Cyprus-based businessman Igor Grechushkin, left for its final voyage from the port of Batumi, Georgia, in September 2013 en route to Mozambique, yet never reached its destination.

The New York Times reports, citing then-captain Boris Prokoshev, that the vessel was requested to make an unscheduled stop at Beirut to pick up additional cargo to be transported to Jordan for extra cash.

Upon entering port, the ship was seized by the local authorities. The vessel was abandoned by its owners after the charterers lost interest in the cargo.

​The ammonium nitrate unloaded and put in a dock warehouse for safety reasons.

The highly combustible white chemical substance was inappropriately stored in the port, according to Lebanese authorities.

​The New York Times published satellite images of the submerged hull of the ship, the MV Rhosus, on the northern edge of the port. According to the newspaper, the 86-metre-long single-deck vessel began sinking in February 2018 after years of being stranded in the port.

The facility where the ammonium nitrate was stored ignited on the evening of 4 August, with two explosions occurring within 33 seconds of each other.

Conflicting reports have emerged regarding the cause of the fire that triggered the explosions, ranging from welding work at the warehouse to bags of fireworks supposedly stored at the warehouse alongside the ammonium nitrate.

Meanwhile, in Beirut, as mourning gave way to indignation, people took to the streets in protest, demanding the resignation of the government and social reforms.

Demonstrations have been marred by violence as protesters clashed with law enforcement, pelting police with projectiles, and security forces retaliating with tear gas.