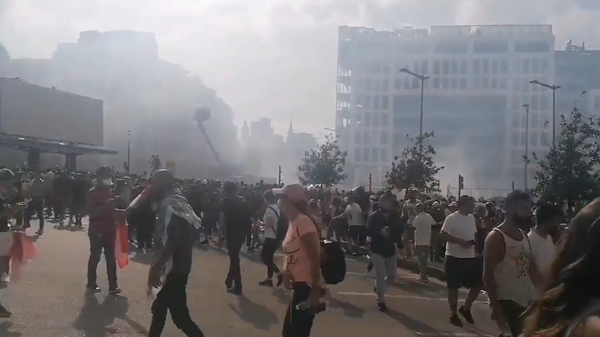 Ilya Tsukanov
All materialsWrite to the author
Saturday's protest comes days after a massive ammonium nitrate explosion devastated much of the Lebanese capital, leaving over 150 people dead, thousands injured and up to 300,000 residents without a home.

Social media users have posted images and videos showing protesters clashing with police in Beirut, with authorities deploying tear gas and demonstrators arming themselves with rocks and sticks and trying to break into a secure area in the city center.

Downtown Beirut is already covered in a cloud of teargas and the protests started 1/2 an hour ago. pic.twitter.com/yOkasG87zm

security forces thrown teargas as people chant 'the people want the downfall of the regime' in Beirut https://t.co/e5diX64KPb

Rocks and sticks come out, as protestors trying to break their way into ‘securuty zone’ city center and parliament building area, protected by blast walls. Crowd swelling as tear gas fired by riot police on the inside. It’s going to be a long night. #Beirut pic.twitter.com/vyL6AjyXuX

- A group of protesters are heading toward Beirut's municipality.

Protesters are reportedly moving toward the country's parliament building, with security forces earlier establishing a security perimeter, with demonstrators shouting slogans including "revolution" and "down with the regime."

Saturday's protest follows clashes between police and protesters on Thursday in which tear gas was similarly deployed after demonstrators lit a small fire and threw rocks at security personnel near parliament.

Protesters are demonstrating over a range of issues, from the economic crisis facing the country amid the coronavirus pandemic and the collapse of Lebanon's banking system, to Tuesday's devastating explosion at the Beirut port, which heavily damaged much of the city, with demonstrators now seeking accountability from officials.

A Beirut judge ordered the arrest of the director of the country's customs service and the manager of Beirut's port on Friday in connection with the investigation into the blast.

Also on Friday, President Michel Aoun rejected calls for an 'international' investigation, suggesting such efforts could "dilute the truth." Aoun said that there are "two possible scenarios for what happened: it was either negligence or foreign interference through a missile or bomb."

Hassan Nasrallah, leader of the Hezbollah political and militant movement, suggested that the Lebanese army should take over the probe, as it is the most respected institution in Lebanese society.

Dozens of countries from around the world have sent aid to Lebanon in an unusual show of international solidarity following the explosion, with Russia, Iran, Iraq, Cyprus, Qatar, Tunisia, Turkey, France, Germany, the Netherlands, Italy, China and the US sending planeloads of supplies, offering to treat the injured, or taking part in rescue operations. Israel has also offered to provide assistance to Lebanon despite cool relations between the two nations, with support expected to be sent via a third country after Tel Aviv's aid offer did not receive a response from Beirut.

At least 157 people were killed in Tuesday's blast, with over 100 others remaining missing, and more than 5,000 receiving injuries of varying severity. The explosion has left as many as 300,000 people homeless, and caused damage estimated at between $3 billion and $15 billion. The blast was attributed largely to a stock of 2,750 tonnes of ammonium nitrate stored at a warehouse in Beirut's port, and had an explosive force equivalent to that of a small nuclear bomb.