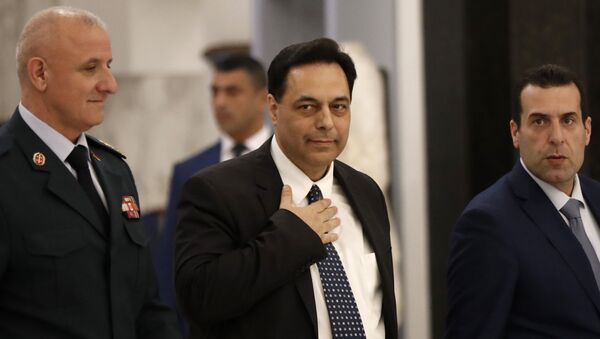 © AP Photo / Hussein Malla
Subscribe
Ilya Tsukanov
All materialsWrite to the author
Prime Minister Hassan Diab was appointed to his post in January 2020, succeeding Saad Hariri. Diab’s short time in office has been racked with instability from events mostly out of his control, starting with the coronavirus pandemic and the accompanying economic crisis, and culminating in the August 4 explosion in the port of Beirut.

Lebanese Prime Minister Hassan Diab has called for new parliamentary elections, saying they are the only way to take the country out of its current crisis.

“We cannot get out of this structural crisis without holding early parliamentary elections,” the independent Sunni politician said Saturday in a televised address.

Diab clarified that he would be ready to continue carrying out his duties for the next two months until all of Lebanon’s political parties can agree on how to proceed.

Commenting on the ongoing probe into the August 4 explosion in Beirut, which has claimed the lives of over 150 people, injured over 5,000 and displaced as many as 300,000 others, Diab promised that the investigation will continue to expand until everyone involved is held accountable. “I firmly reiterate that none of those responsible for the Beirut Port tragedy will escape punishment,” he stressed.

Diab added that he considers the port explosion to have been the result of years of “corruption and mismanagement” by his predecessors.

Under Lebanon’s complex political system, which seeks to maintain a balance between Maronite Christians, Sunni Muslims and Shia Muslims, the prime minister can only be appointed and approved or removed by the president (with that post held by Maronite Christian Michel Aoun) with no consultations required from the country’s parliament. But the prime minister is required to retain the confidence of the majority of parliament.

"The opposition would probably lose an election, because they were the dominant force in government for years and bear most of the responsibility for what happened in the port. That is why they have chosen to push for violence on the streets," Marandi said, speaking to Sputnik. 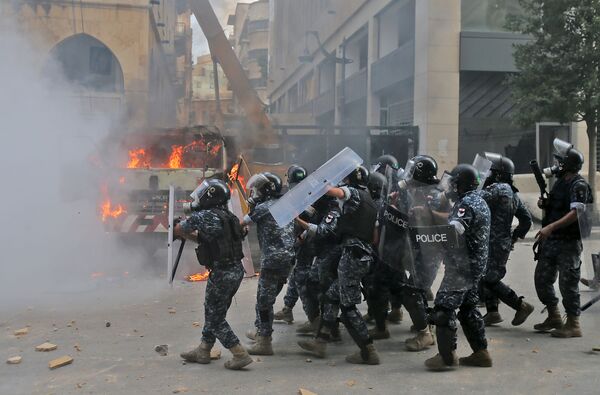 Lebanese security forces advance during clashes with protesters in downtown Beirut on August 8, 2020, following a demonstration against a political leadership they blame for a monster explosion that killed more than 150 people and disfigured the capital Beirut.
© AFP 2021 / STR

Diab’s remarks Saturday evening amid hours of heavy clashes in the Lebanese capital between riot police and several thousand protesters, with demonstrators demanding the government’s resignation over a range of issues, including the explosion at Beirut’s port, but also the long-running economic crisis facing the nation, which was intensified earlier this year by coronavirus and a banking collapse, which prompted Lebanon to default on its debt in a historic first.

Protesters stormed the foreign ministry building on Saturday, setting vehicles on fire, and throwing rocks and other projectiles at police, who deployed tear gas as demonstrators sought to enter a fortified area around parliament. Protesters broke into the foreign ministry building, with a group of former army officers proclaiming it the “headquarters of the revolution.” Demonstrators also reportedly entered other state buildings, including the Banks Association headquarters and the ministry of finance.

At least 55 people have been taken to hospital from the scene of the protests, with the Lebanese Red Cross estimating that over 100 others have been treated on site. Police have confirmed that one officer has been killed in the unrest, with the government deploying reinforcements.

Government forces have begun to send reinforcements into the center of #Beirut as violent riots continue. pic.twitter.com/KVhVJXZpYm

‘Not What Our Country Needs’

Dr. Marwa Osman, a Beirut-based journalist and political commentator, told Sputnik that Diab’s resignation couldn’t have come at a worse time, pointing out that there are still people buried under the rubble, getting treated in hospital or being buried following the August 4 port blast.

“This is not what our country needs at the moment, we rather need calm in order to ease from this disaster and make sure all those responsible get brought to justice,” she said.

“The statement by the PM I am afraid is at the wrong timing. He should have waited at least until the investigation was over to propose calling for new elections,” Osman suggested. “Add to that we are still in the midst of a pandemic so that is not a very wise move.”

“Early elections with the current electoral law will produce nothing new. A new electoral law is needed first, one that is non-sectarian and that includes all of Lebanon under one district. [Anything] other than that is just digging further in more political deadlock,” the journalist explained.

Dr. Alam Saleh, a member of the British Society for Middle Eastern Studies, said the unrest in Beirut is unfortunate, but not unexpected, given national trends and efforts by foreign states to exploit the situation.

“The political fragmentation as well as the social division in Lebanon has never been [this] wide. The systematic corruption and economic inefficiency is historical high and people are no longer buying political excuses. The regional developments and instability also spill over conflicts and insecurity inside the country. Regional and international actors have their own interests in Lebanon, and each tries to enhance their interests, neglecting Lebanese demands and wishes. In such a difficult time, the state is not responsive nor transparent and this of course leads to anger and frustrations amongst Lebanese regardless of their sectarian and ideological background,” Saleh suggested.

Walid Jumblatt, a veteran politician and leader of Lebanon's Druze Progressive Party, echoed the latter sentiment, telling Sputnik that "the people have risen against the current government, and the political system needs changes. The Lebanese people are tired of the government's inaction, especially that of the current ministries."

000000
Popular comments
One wonders how much this Mafioso was paid to attribute the nuclear attack on his country's capital on corruption instead of the real culprits Israel?