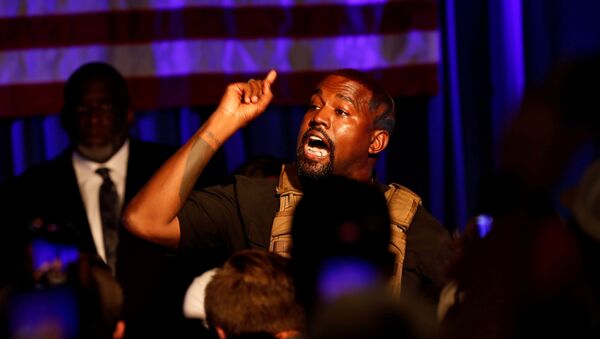 © REUTERS / Randall Hill
Subscribe
West announced his late presidential bid as an independent candidate on Independence Day, though there is little chance he will be able to get on enough ballots and obtain the 270 electoral votes needed to win.

Kanye West has been dropped from the ballot in his home state of Illinois, failing to get the needed 2,500 signatures, state officials said on Friday.

The State Board of Elections conducted a review after objections were filed against Kanye's petition to get on the ballot, and found out that out of all the 3,128 signatures on his documents, 1,928 are invalid. It was not mentioned why exactly the ballots were ruled unacceptable.

One of those who challenged Kanye's petition, Sean Tenner, said that he was moved by the rapper's speech in South Carolina, where he said that Harriet Tubman did not free slaves. "She just had the slaves go work for other white people", West said.

"Celebrity or not, everyone has to follow the rules", Tenner said. "He didn't come close", apparently meaning that the rapper fell short of getting 2,500 signatures.

The number of signatures to qualify for the ballot was earlier reduced from 25,000 to 2,500 for independent candidates due to the novel coronavirus pandemic.

000000
Popular comments
You would expect anything less from a Trump buddy? Should throw this monkey back in his cage where he belongs!