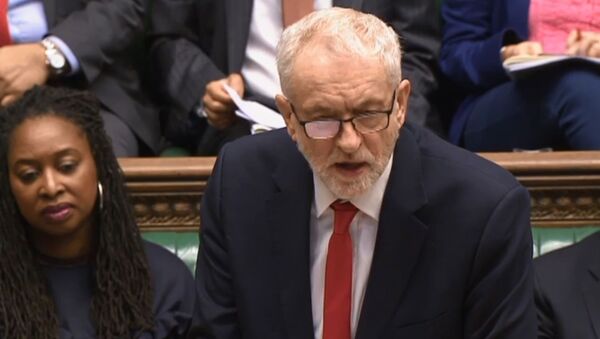 © Parliament TV
Subscribe
In April a leaked internal report into Labour’s handling of antisemitism allegations concluded that “factional hostility” towards then-leader Jeremy Corbyn might have scuppered the party’s efforts to tackle the problem, which plagued his tenure as leader.

Ex-Labour leader Jeremy Corbyn and his former team have slammed “hostile” officials within the party for sabotaging the party’s chances in the 2017 election campaign, reports The Guardian.

In a joint statement evidencing the continued splits within the UK Labour Party, Corbyn, jointly with the party’s 2017 election committee, also comprising McDonnell, the former shadow ministers Jon Trickett and Ian Lavery, and five senior aides to Corbyn at the time, have endorsed earlier claims that made headlines after a party report was leaked in April.

According to a submission to the party inquiry launched to probe the leaked report, it is claimed that the alleged diversion of some party funds during the 2017 election might amount to fraud, as the former opposition leader and his team insist there is proof of sabotage from some unnamed officials in Labour headquarters.

“We believe that there is clear evidence of factional activity by senior paid employees of the party against the elected leadership of the time,” the submission is cited by the outlet as saying.

The staffers in question were slammed as having been uncooperative and refusing to allocate resources to “winnable target seats”, says the submission.

“It’s not impossible that Jeremy Corbyn might now be in his third year as a Labour prime minister were it not for the unauthorised, unilateral action taken by a handful of senior party officials,” says the document, citing Labour’s narrow loss in the 2017 election.

If claims contained in the report of significant sums of money being spent on such actions without authority are corroborated, the inquiry must consider “whether it may have constituted fraudulent activity”, said the submission.

The joint statement also underscores the “toxic culture” at Labour headquarters, citing a selection of WhatsApp messages as glaring proof.

‘Stab in the Back’

The report has sparked an indignant response from the officials accused, who are cited as having referred to it as “a mythical ‘stab in the back’ conspiracy theory to absolve themselves”.

The staffers added that at the time, all spending was legitimate, declared and accounted for.

“The leaked report contains no evidence that party staff did not try and do the best they could to win the 2017 election. Not one piece of actual evidence,” one of the officials blamed by Corbyn was quoted by the outlet as saying.

Pushing back against the accusations lobbed at them by Jeremy Corbyn, the officials accused of “sabotage” have made a formal submission to the inquiry, according to The Guardian, alleging that the leaked report misused their WhatsApp messages to falsely make them seem racist and sexist. The staffers also are cited as having vowed to sue Labour for data protection breaches and libel over the document.

Initially, the row erupted in April after a 860-page internal party report, authored anonymously, was leaked to the media, shortly after Keir Starmer succeeded Jeremy Corbyn as Leader of the Labour Party, after the party’s defeat in the 2019 UK general election. 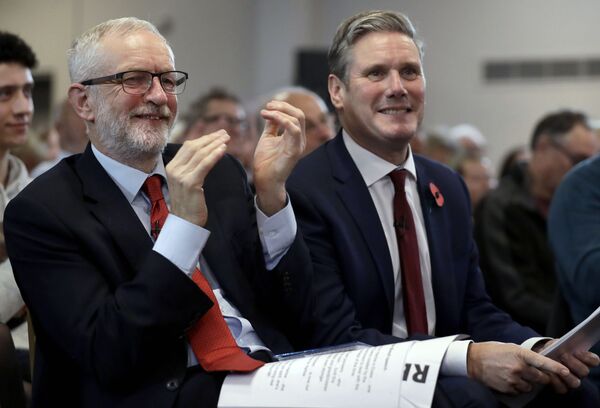 The document pertaining to an anti-semitism inquiry inside the UK Labour Party had supposedly revealed that investigations into accusations of racism were “thwarted” by internal opposition to the leadership of ex-leader Jeremy Corbyn.

The inquiry discovered that while no current or former staff were “motivated by anti-Semitic intent” when dealing with anti-semitism complaints, “factional hostility” towards Jeremy Corbyn from former senior staff contributed to "a litany of mistakes" in tackling the issue.

Jeremy Corbyn's tenure as leader was plagued by accusations of fostering growing anti-Jewish racism within the Labour Party, leading to resignations by MPs in protest.

Thousands of private WhatsApp messages and some 10,000 emails between senior party members were reportedly uncovered, pinpointing individuals that "openly worked against the aims and objectives of the leadership of the Party" and that key staff were actively working to prevent the party from winning the 2017 general election.

000000
Popular comments
Western Democracies are as fake as their news. By the people for the people is the biggest scam of them all. These so-called democracies will never let a person who puts people first before corporations win an election

tsader
8 August 2020, 12:57 GMT4
000000
Keir Starmer was and still is the 20th-century murderer equivalent of Julius Ceaser episode. To pay those labor party employees with the money of Labor party member's contributions was preposterous. Corbyn should realize that the army, the finances, the oligarchs, the judges, the royals, the media, and more have been educated to be fear of communism or socialism ideas. Many if not all are quite happy to cheat the Labor members contributors to be paid their monthly salary and still undermine their leader.