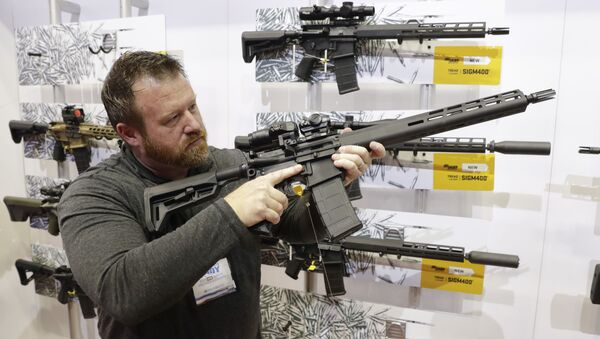 © AP Photo / Michael Conroy
Subscribe
Ekaterina Blinova
All materialsWrite to the author
The New York attorney general's bid to dissolve the NRA has prompted a heated debate on Twitter with netizens wondering why the state authorities have shied away from probing the Clinton Foundation's alleged fraud for decades. Wall Street analyst Charles Ortel has shed light on AG James' move and explained why it's a "gift" for Donald Trump.

On Thursday, New York Attorney General Letitia James announced that she had filed a lawsuit against the National Rifle Association (NRA) and its leadership striving to dissolve one of the oldest gun rights advocacy group founded in 1871.

AG James accused the entity's leadership, including Executive Vice President Wayne LaPierre, of taking millions of dollars for personal use, something the NRA resolutely denies. Being registered with the IRS as a social welfare organisation (501(c)(4)) the NRA cannot use its earnings to the benefit of any private shareholder or individual.

However, in a strange twist of fate the attorney general office's announcement has abruptly turned the spotlight on another charitable organisation, namely the Clinton Foundation, making it trend on Twitter on 6 August.

...Then why isn't she also investigating the Clinton Foundation which is based out of New York?

​Tens of thousands of US users wondered as to why the New York state authorities have gone after the NRA while turning a blind eye to the Clintons charity's alleged fraud for decades.

'Seeking to Shut Down NRA is Overly Aggressive Tactics'

"The NRA is a New York nonprofit charity whose affairs are properly overseen by the NY Attorney General", explains Wall Street analyst and investigative journalist Charles Ortel. "In addition, because the NRA solicits donations outside New York, its affairs might be regulated by other attorney generals, by the IRS, by the Department of Justice, and by the Federal Trade Commission.

However, seeking to dissolve the NRA altogether appears to be an overly aggressive tactics, says the analyst, citing a similar view voiced by Noah Feldman, a Harvard Law professor, in his latest Bloomberg op-ed.

"If the present management is, in fact, incapable of running the NRA in compliance with laws, then the attorney general might seek to appoint a conservator who then could work to repair any damages to the organisation caused by present management, rather than dissolve the entity", Ortel elaborates.

Besides this, the timing of the legal attack against the NRA also prompts justified concerns, according to the investigative journalist.

"Coming just as election season builds to a crescendo on 3 November 2020, the timing certainly is suspicious as is the set up", Ortel opines. "On Wednesday, AG James announced she would be making a statement 'of national importance' on Thursday at 11:30 AM. James is not a federal official and should be concentrating on the disastrous breakdown of law and order under herself and Governor Cuomo inside New York".

He draws attention to the fact that prior to this, a number of Democratic mayors and governors endorsed the idea to defund the police amid nationwide protests over the death of George Floyd in police custody.

"Defunding the police and taking guns away from licensed Americans who are law-abiding is yet another hare brained scheme from Democrats", he remarks.

The parallels drawn by netizens between the New York authorities' attitudes towards the NRA and the Clinton Foundation are striking, according to the Wall Street analyst, who has been investigating the Clintons charity's alleged fraud for several years.

"Unlike the NRA, the 'Bill, Hillary & Chelsea Clinton Foundation' is, in theory, an Arkansas nonprofit corporation", he observes. "However, the 'Clinton Foundation' never organized itself lawfully as an independent charity capable of storing records of the Bill Clinton presidency, outside the control of the Clinton family. Moreover, it never amended key organizational documents lawfully or registered to solicit and operate outside Arkansas in any legal jurisdiction inside or outside the United States".

Citing the work by Peter Schweizer, the author of "Clinton Cash", as well as the inquiry by independent expert forensic investigators Lawrence W. Doyle and John F. Moynihan, Ortel highlights that "obvious defects in Clinton 'charities' are well known".

BREAKING NEWS: New York AG Letitia James sues to dissolve the NRA https://t.co/hYImTEu1NX via @MailOnline
But not @ClintonFdn which operated illegally in NY from 1998 as her Charity Bureau knows from me and from @LWDoyleUSA what say you @realDonaldTrump @FBI @TheJusticeDept ?

​"The Clinton's have raised, they claim, more than $3 billion for a charity that originally argued it needed $100 million for a Little Rock archive and research center", the analyst points out. "It certainly never was independent from the Clinton family and its finances have never been audited by truly independent, competent accountants as New York and many other laws specifically do require. What actually happened to at least $2.9 billion of missing money? That is a big question that must be answered".

Although on paper New York laws are quite strict – especially when it comes to charities – since the end of the 1990s successive attorney generals, including Andrew Cuomo, who is now serving as New York governor, show little if any interest to the discrepancies in the Clinton Foundation's documents and financial filings, according to the investigative journalist.

A Gift for Team Trump

Against the background of treating the Clintons' charities with kid gloves, the New York attorney general's office and its political backers have obviously shot themselves in the foot by seeking to shut down the gun rights group, according to Ortel.

"With the NRA action AG James has galvanised one large force of law and order voters who will swarm for Team Trump on 3 November 2020", the analyst foresees. "Doing so at the same time many Democrats want to defund the police, promote Antifa anarchy, and soak the rich likely will push moderate Democrats and many independents to team Trump".

The incumbent president has already signalled his attitude to the lawsuit against the NRA: "Just like Radical Left New York is trying to destroy the NRA, if Biden becomes President your great Second Amendment doesn’t have a chance", Trump tweeted on Thursday.

Just like Radical Left New York is trying to destroy the NRA, if Biden becomes President your GREAT SECOND AMENDMENT doesn’t have a chance. Your guns will be taken away, immediately and without notice. No police, no guns!

​Meanwhile, conservative media pundits and lawmakers stood up for the NRA either.

This is not an attack on the @NRA.

This is an attack on the American people. #DontTreadOnMe

​"First Democrats wanted to defund the police, and now they are trying to eliminate your god-given rights enshrined in the Second Amendment. This attack on the NRA is the latest step in their far-left agenda", Republican Congressman Doug Lamborn echoed the president in his tweet.

You come for the NRA,

You come for all of us.

"We must stop the madness", the statement says. "Fortunately, the American people can read the tea leaves of this lawsuit – it is a partisan hit job aimed at empowering the mob and endangering law abiding citizens, who respect the Second Amendment".

"We must stop the madness. Fortunately, the American people can read the tea leaves of this lawsuit – it is a partisan hit job aimed at empowering the mob and endangering law abiding citizens, who respect the Second Amendment.” –@RepublicanAGs Chairman Louisiana AG Jeff Landry pic.twitter.com/rctP5seCra

​For its part, the NRA announced that it would spend "tens of millions" in battleground states to tip the balance in the Republicans favour, warning that if Democratic presumptive nominee Joe Biden wins, the Americans rights to bear arms will be in danger. Previously, Biden endorsed the assault weapons ban.

"You are literally going to be dealing with the potential confiscation of firearms", the NRA’s Jason Ouimet told the Washington Free Beacon on Thursday. "You can't own certain things for self-defense".

Given the scale of the backlash emerging from the conservative camp one may say that AG James is actually boosting Team Trump, though she may believe she is helping Democrats by her actions, Ortel concludes.