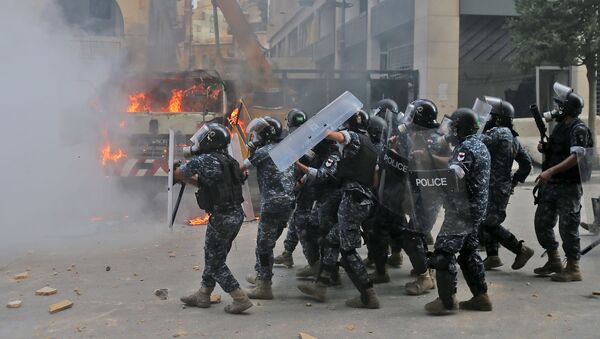 Beirut Live Updates: Over 70 Security Officers Injured, One Dead in Clashes With Protesters

Subscribe
The protests are taking place in the aftermath of a huge blast at Beirut's port on Tuesday, which has killed at least 158 people and left some 5,000 injured and 300,000 homeless.

Demonstrations resumed in the Lebanese capital earlier in the day, with protesters demanding the resignation of the government and social reforms. Protests have already been marred by violence, with demonstrators throwing projectiles and police firing tear gas.

The number of people injured in ongoing clashes between police and protesters in central Beirut has climbed to 490, according to local media reports.

CAIRO (Sputnik) - The number of those injured in Saturday's clashes between protesters and security forces in Beirut has risen to 728, according to Al Jazeera.

CAIRO (Sputnik) - The Lebanese army has expelled protesters from the buildings of the economy and energy ministries that were occupied during Saturday's unrest in Beirut, al-Arabiya al-Hadath reported.

Afterward, calm has finally returned to the streets of the Lebanese capital, according to the channel.

CAIRO (Sputnik) - Over 70 law enforcement officers were injured and one died during Saturday's unrest in Beirut, according to Lebanon’s General Security Directorate.

"While carrying out the task to maintain security and order at demonstrations in central Beirut on 8 August, which escalated into riots, 1st Sgt. Tawfiq al-Douayhi was martyred and more than 70 members of the security forces sustained injuries", the directorate said.

Videos Show Military Trying to Maintain Order in Beirut Amid Anti-Govt Protests
21:51 GMT 08.08.2020
Number of Those Injured in Beirut Unrest Rises to 490 - Reports

CAIRO (Sputnik) - The number of those injured in Saturday's clashes between protesters and security forces in Beirut has climbed to 490, Lebanon's Al-Manar channel reported, citing the emergency medical services.

BEIRUT (Sputnik) - The Lebanese Armed Forces are pulling additional units to downtown Beirut and are taking the situation under control amid ongoing anti-government protests, a Sputnik correspondent reported from the scene on Saturday.

According to the correspondent, the military is deploying more forces to the central parts of the city and surrounding areas.

Meanwhile, the Lebanese MTV channel reported that the military personnel also arrived at the building of the Energy Ministry after protesters tried to storm it.

MOSCOW (Sputnik) - A fire erupted on Saturday inside the headquarters of the Lebanese Banks Association after protesters broke into the building amid chaos across Beirut, media said.

The blaze was reported by a Lebanese television channel MTV. Dozens of demonstrators have reportedly stormed the building and trashed offices.

BEIRUЕ (Sputnik) - The Lebanese Armed Forces managed to free the Foreign Ministry building from protesters and did not face resistance, a security source told Sputnik on Saturday.

Earlier in the day, anti-government demonstrators occupied the building and tried to storm several other state institutions of the country.

2/2 We support them in their right to peaceful protest, and encourage all involved to refrain from violence.

1/2 The Lebanese people have suffered too much and deserve to have leaders who listen to them and change course to respond to popular demands for transparency and accountability.

MOSCOW (Sputnik) - The number of people injured in ongoing clashes between police and protesters in central Beirut increased to 238, the Lebanese Red Cross said on Saturday.

Earlier in the day, the red cross said that 172 people were injured.

#Beirut Demonstrations - UPDATE: #LebaneseRedCross has transported 63 people to nearby hospitals and has treated 175 people at the scene.

18:11 GMT 08.08.2020
Videos of Violent Clashes Between Protesters and Police Continue to Emerge Online

All of a sudden, Army started beating protesters viscously near ring. As I was filming, army beat me and threw my phone away. Army still beating other protesters. #LebanonProtests pic.twitter.com/COQbWRGzC8

BRUSSELS (Sputnik) - European Council President Charles Michel urged Lebanon on Saturday to allow an independent probe to be conducted into the deadly blast that devastated the Beirut port.

"He called for an independent enquiry to shed light on the causes of this catastrophe and offered European expertise," his office said in a press release.

The EU leader travelled to the Lebanese capital on Saturday to "witness the scale" of Tuesday's blast, which killed almost 160 people, injured 5,000 others and left 300,000 homeless.

Michel said the European Union stood by the people of Lebanon and promised its urgent assistance. Nearly $39 million has been mobilized for emergency needs and more than 250 rescuers from EU countries are working on the ground.

MOSCOW (Sputnik) - Anti-government protesters in Beirut are storming the building of the Association of Banks in Lebanon, the Al-Jadeed TV channel reported on Saturday.

Earlier in the day, a Sputnik correspondent reported that protesters have occupied the building of the Lebanese Foreign Ministry, while Al-Jadeed said that the military has sent its personnel to the building following the takeover.

MOSCOW (Sputnik) - The number of people injured in ongoing clashes between police and protesters in central Beirut has risen to 172, the Lebanese Red Cross said on Saturday.

Protests resumed in the Lebanese capital earlier in the day, with protesters demanding the resignation of the government and social reforms. Protests have already been marred by violence, with demonstrators throwing projectiles and police firing tear gas. Over a dozen ambulances had arrived to treat those injured.

#Beirut Demonstrations - UPDATE: #LebaneseRedCross has transported 55 people to nearby hospitals and has treated 117 people at the scene.

Government forces have begun to send reinforcements into the center of #Beirut as violent riots continue. pic.twitter.com/KVhVJXZpYm

A fire broke out in a truck in the main square in central Beirut, Reuters reported, citing eyewitnesses.

Prime Minister of Lebanon, Hassan Diab, said that the only way out of the country's deep crisis is early parliamentary elections.

He also said that an investigation into the Beirut port blast will expand until it gets to everyone involved in the deadly explosion.

The main reason behind the recent explosion in the Beirut port was corruption, Diab said.

"The explosion that shook the port was due to corruption," Diab said during a public address, as broadcast by the AL-Mayadeen broadcaster.

Security officers guarding the Lebanese parliament building have refuted media reports that live rounds have been used during the protests in central Beirut, LBCI News said.

16:43 GMT 08.08.2020
One Security Officer Reportedly Killed During Clashes With Demonstrators in Beirut

At least one security officer has been killed during clashes with protesters in central Beirut on Saturday, MTV channel reported.

16:36 GMT 08.08.2020
Protesters are Reportedly Storming the Ministry of Economy and Trade Building in Beirut

Lebanon now 💔🇱🇧 Chaos and fire and riots and tear gas and live bullets in the streets of #Beirut 🔥💔🇱🇧 #لبنان_ينتفض https://t.co/yplkzoOmTS

MOSCOW (Sputnik) - The Lebanese army has sent in its personnel after protesters took over the Foreign Ministry building in Beirut, the Lebanese Al-Jadeed channel reported Saturday.

Earlier in the day, protesters stormed into the building of the Lebanese Foreign Ministry in Beirut and unfurled banners with protest slogans.

BEIRUT (Sputnik) - Protesters have occupied the building of the Lebanese Foreign Ministry in Beirut, a Sputnik correspondent reported on Saturday from the scene.

The crowd took over a section of the building and unfurled banners reading "Beirut is a demilitarized city" and "the capital of the revolution."

The Foreign Ministry's building was heavily damaged in the recent port warehouse blast.

Protesters have seized the foreign ministry in Beirut. #beirutprotests pic.twitter.com/T2ZSjjRTHH

The shooting was heard at the scene of anti-government protests in central Beirut on Saturday, Reuters reported, citing local police.

#Beirut Protest: 28 people have been transported to nearby hospitals. 102 people are being treated at the scene. pic.twitter.com/FWIJ7hMVwn

Flag of Lebanon✊🏼: #Lebanon has had mass protests against the govt since 2019 but this demonstration today in #Beirut is one of the biggest protests yet! The Lebanese are in full scale revolt against the govt #LebanonProtests #BeirutExplosion@RevoWatch #breakingnews #BREAKING pic.twitter.com/mK2Jglk5gn

Protesters Urge Lebanese Government to Resign Following Beirut Port Explosion - Video
000000
Popular comments
Translation: At least we now know why the French PM (Rothschild stooge) went there, too bad it was not recorded who he met in private to get these organized riots started. BTW, the Red Cross is about as helpful to the least important people as USAID is. They are front and centre of the multi-billion dollar abortion industry so they are there to help themselves.