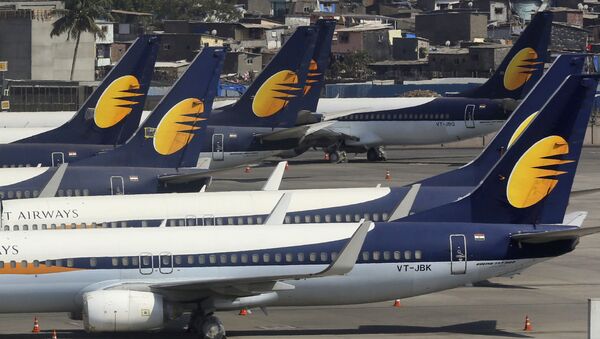 Pratibha Sharma
Sputnik correspondent
All materialsWrite to the author
New Delhi (Sputnik): With the void left by India's major full service carrier Jet Airways - grounded due to the financial crisis since April 2019 - low-cost carriers in the country are seeking to fill the gap by kick starting long-haul flight operations. But with economic constraints due to the pandemic, their capacity to do so remains debatable.

Low cost Indian airlines IndiGo and SpiceJet have shown a keen interest in undertaking long-haul flights on international routes. The latter has even undertaken its first long distance flight on the Bengaluru-Amsterdam route to repatriate Indians and has secured slots at London's Heathrow Airport under the Indian government's air bubble agreements.

But is a lost-cost model in flights durable for long-haul? Are Indian budget carriers - already reeling under the financial crisis - ready for the increased cost of operations amid the uncertainty looming over traffic growth and revenue returns.

Harsh Vardhan, an aviation expert, tells Sputnik that the biggest challenges for these airlines at this point is survival. Undertaking cost-intensive long-haul operations when all of them are susceptible to collapse is risky.

"I do not how many of them will survive as many are down to zero traffic. Earlier, you could increase the traffic by reducing prices. Today, the situation is that people do not want to travel even free of cost," Harsh Vardhan said.

Airlines in India are not able to raise money and have asked the government to provide short term relief. Losses and liabilities are increasing every month. India's biggest airline Indigo posted a net loss of $379.2 million in the first quarter (April-June) of the financial year 2020-21.

"The fuel that international carriers are getting is at much lower price, and the Indian low-cost airlines would be in direct competition with these international operators," Vardhan underlined.

He also mentioned that when a low-cost carrier start international flights, it involves a gestation period ranging from 18-36 months. For the long-haul sector, the cost of gestation is very high, making it difficult for financially crippled airlines to sustain.

Several other budget carriers across the world, such as Wow Air and Primera Air, which adopted this model of flying, have had to file for bankruptcy.

Acquiring wide-body jets to fly long-haul distances is an integral part of international operations. However, the addition comes with an added cost of operations in terms of fuel, maintenance and crew - at a time when revenue and traffic is uncertain.

Even though the new long-haul narrow-bodies are opening up vast new opportunities for airlines, experts point out that it is only one part of the puzzle.

Industry expert Gaurav Sahni and member of a major MRO firm, talked to Sputnik about the alternative methods that can prove to be more efficient for airlines in these difficult times - including taking aircraft on wet lease, a method that allows the hiring of an aircraft complete with operating crew.

SpiceJet's first long haul flight from Bengaluru to Amsterdam was carried out on a plane wet lease on another airline's aircraft. The airline is also mulling to wet lease Airbus A330 and utilise it for charters under India's air bubble to the US, UK, France and Germany.

SpiceJet managing director Ajay Singh, had stated last year that "the high cost of ownership for new-generation wide-bodies is a key obstacle in the development of long-haul, low-cost air travel."

Adding to this, Sahni stated, "In the end, you are also not sure how much traffic would happen on these because of low demand currently. Therefore, as every airline is majorly running on capacity surplus currently, aircraft can be taken on wet lease."

Meanwhile, low-cost carrier Indigo told Sputnik that it had always considered wide-body aircraft, but would see whether the move would fit in with its overall strategy.