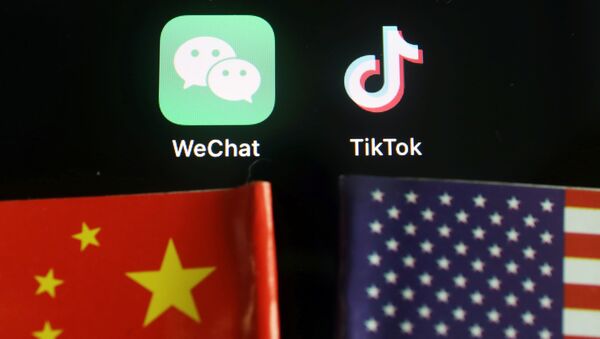 © REUTERS / FLORENCE LO
Subscribe
Earlier reports claimed Microsoft is in negotiations with ByteDance, the Chinese owner of TikTok, to purchase its global business, including operations in India and Europe, ahead of a looming 15 September deadline for the viral video app to either complete the sale of its US operations to non-Chinese owners or face a ban in the United States.

On 2 August, Microsoft announced it was in talks with Chinese firm ByteDance, the parent company of the video-sharing social networking service TikTok, to explore “a purchase of the service in the United States, Canada, Australia, and New Zealand,” in a bid to avert a ban of the platform’s operations in the US as part of Washington’s crackdown on Chinese companies over perceived security concerns.

More recent reports have suggested the US tech giant is seeking to expand on these plans, hoping to acquire the global operations of TikTok. 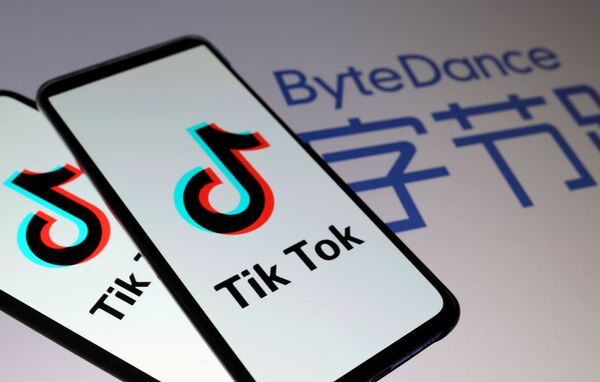 TikTok logos are seen on smartphones in front of a displayed ByteDance logo in this illustration taken November 27, 2019
© REUTERS / Dado Ruvic

The reports have sparked concerns that if the deal goes through, Microsoft will have purchased a Chinese company accused by Washington of harvesting user data and posing a security threat - allegations that have been vehemently denied by the Chinese government and the companies under scrutiny.

A deadline of 15 September for the application to be bought by US owners was set, with Donald Trump vowing to ban the app in the United States.

Anthony Robert Pahnke, Professor of international relations at San Francisco State University, believes that whether we like it or not, data harvesting is part of the global economy, with many companies and governments participating, and TikTok just one player in this game. Drawing parallels with how big tech companies, such as Facebook, acquire rivals instead of competing with them, to take new technology instead of developing it, Professor Pahnke is of the opinion that the deal with Microsoft and Tiktok will go through.

“There is no precedent for a President to block such a transaction. This is the area of anti-trust legislation, which means that a case has to be filed to either block the acquisition, or break it up once it is concluded,” says the Professor.

Referring to Donald Trump's public claims that Tiktok should “pay something to the Treasury” for the deal to take place is odd, according to Pahnke, given that it's unclear how this would take place.

“This is more likely an effort by the President to appear strong with respect to China than an actual effort to protect the American people. If the President was serious about protecting American companies, or people, then we should involve the Department of Justice and its anti-trust division”.

Asked about the reports that Microsoft was exploring the possibility of purchasing TikTio global operations,
Daniel Ives, Managing Director of Equity Research at Wedbush Securities in New York, said:

“At this point, it looks like Microsoft buying TikTok's US operations (and potentially other regions) has at least a 75%-80% chance of getting done in our opinion, with the green light already by the White House for a deal and a potential coup for Nadella & Co. to get this prized asset.”

Acknowledging that deal negotiations will be complex, riddled with technology and data privacy issues that need to be worked out (national security concerns to be met between Chinese and US data) before an agreement is inked, he added:

“We believe ByteDance is playing a game of high stakes poker with Microsoft looking like the only white knight around. With other FAANG tech stalwarts currently up to their eyeballs in regulatory swirls, Redmond is the only US technology stalwart with the treasure chest, infrastructure, and distribution to get a deal like this done, as financial buyers (PE, etc.) are not viable options given this complex Rubik's Cube political backdrop."

Daniel Ives concluded that after MSFT likely acquires TikTok there will hardly be “any more noise around data issues”, especially if it’s only the US operations.

Underscoring the fact that negotiations of such a scale between Microsoft and TikTok are highly unusual, Munzir Ahmad, a New Delhi-based cybersecurity expert, tech journalist and founder of internet service provider Sky Televentures, dubbed the potential deal a “game-changer” for the US technology company.

“In times when demand for video content is widespread, Microsoft's move can prove to be a game-changer to enter the video space. Gradually, Microsoft can take advantage of this app to compete with YouTube and Facebook in the video space,” says Munzir Ahmad.

“Microsoft is considered a bit too "old school" for the generation that uses TikTok; this deal, if it happens, would allow for Microsoft to better engage with a younger audience, maybe most especially with its gaming units. And TikTok has no future in the U.S. if it remains in Chinese hands,” said Dr. Anthony Moretti.

Underscoring that Chinese tech firms are going to have to be very careful about any significant investment in the US market, and likely going to have to consider selling US based assets in order to avoid conflicts with the US government, Benjamin Cavender, principal of the Shanghai-based China Market Research Group is of the opinion that Microsoft is looking closely at the acquisition as the company has been seeking for ways to interact with a younger consumer base.

“Assuming that the Trump administration does not find ways to hobble TikTok's functionality an acquisition by Microsoft has the potential to be extremely lucrative due to the number of users, time spent on the app, and the potential for generating tremendous amounts of consumer data and advertising revenue,” said Benjamin Cavender.

000000
Popular comments
if youre going to ban tik tok over data harvesting, then every other country ought to ban google, facebook, twitter, ios, and telegram
covid 19
7 August 2020, 18:41 GMT5
000000
Robbing the others it is the target of US corrupt and criminal.