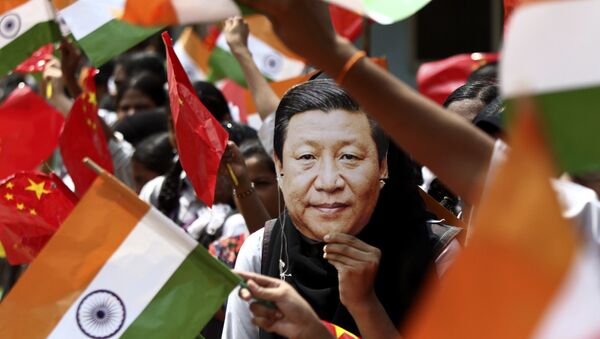 © REUTERS / R. Parthibhan
Subscribe
Nair N.B.
Sputnik correspondent
All materialsWrite to the author
New Delhi (Sputnik): India and China have been engaged in high-level military talks to diffuse tension along the de facto border between the countries in eastern Ladakh after a violent faceoff between their armies on 15 June, in which 20 Indian soldiers lost their lives. The number of casualties on Chinese side is yet to be disclosed.

The disengagement of troops along India’s border with China in eastern Ladakh, after the violent 15 June skirmish, remains unresolved despite several rounds of talks between the military commanders and diplomats of both the countries.

The reluctance of the People’s Liberation Army to vacate the two friction points – Pangong Lake and Hot Spring Gogra, has forced the Indian Army to prepare for the long haul, keeping the upcoming winter and logistics in mind.

Military experts believe the eastern Ladakh standoff between India and China could take longer to resolve, going by past experience during similar incidents, such as Doklam in 2017 and Sumdrong Chu in 1986.

“I am still sceptical about it for one reason - the way China has gone out in all directions like a cowboy. I think the Chinese calculations are different this time they perhaps want to rough it out,” believes Brigadier (ret.) Rumel Dahia, former Deputy Director General of the Manohar Parrikar Institute of Defence Studies and Analysis, a government think tank.

Brigadier Dahia said he didn't think India wants to pursue military options just yet. New Delhi would like to try to avoid a conflict and prevent a war as it has been doing so far, not only at this juncture or in the past.

“Options are always there,” he pointed out, adding that India’s options were not limited to war - there were many other things New Delhi could do, suggests Brigadier Dahia.

“The world is getting together against China. We should revise our policy for Taiwan, Tibet and Hong Kong, nudging, signalling, concrete diplomatic action, coordination with other countries, etc,” he added.

The military veteran said these issues had already reached the global arena in some form, and India needs only to lend its voice. If China could hold informal discussions in the UN Security Council on Jammu and Kashmir, India shouldn’t be defensive when it joins the Security Council in December. New Delhi should lend its support on issues relating to Hong Kong or Taiwan, said Brigadier Dahia.

A document by the Indian Ministry of Defence had stated the present standoff was likely to be prolonged, while engagement and dialogue at the military and diplomatic level has continued to arrive at a mutually acceptable consensus.

The document, which was available on the Ministry website, however, was removed on Thursday (6 August) after two days.

"The situation in Eastern Ladakh arising from unilateral aggression by China continues to be sensitive and requires close monitoring and prompt action based on the evolving situation," the document read.

Commenting on the assessment of the Ministry of Defence, Brigadier Dahia says that from India's standpoint, "we still want to give them enough of a chance" for peace and negotiation, but New Delhi might resort to pursuing other options if it has to.

Rajeshwari Rajagopalan, Distinguished Fellow at the private think-tank Observer Research Foundation, however, said that a military option didn't exist for India, but the country nevertheless needs to be watchful, as at present.

“I doubt India would be contemplating an offensive at all, because the overall capacity cannot be stretched. Forces from the LoC (Line of Control with Pakistan) have already been moved to the LAC (Line of Actual Control with China), but to stretch them throughout the entire border will be very difficult,” opined Rajeshwari.

Rajeshwari Rajagopalan thinks that pivoting to such critically important issues for China as Tibet, Taiwan, Hong Kong, and Xinjiang remains an option for India. She said a number of Indian elite foreign affairs experts have concurred that New Delhi should go on a diplomatic offensive, expanding collaboration with like-minded economies in the Indo-Pacific region and operationalise QUAD (Quadrilateral Security Dialogue) in a much bigger way.

“India should give Taiwan a prominent role in its Indo-Pacific strategy, which would be an important step in the diplomatic offensive against China. Similarly, India needs to make very clear statements on the Hong Kong issue – not like the diluted one New Delhi had made, and on the Uyghur and Xinjiang issues. You've got to hit where it hurts the Chinese nerves,” she said.

Chinese envoy to India Sun Weidong said recently that “we need to straighten our views on several key issues”, if India-China relations should move forward. “China is committed to peaceful development, and is not a 'strategic threat' to India,” he said.

China has always “pursued good-neighbourly friendship, sought development with our neighbours and worked to make the pie of cooperation bigger,” Sun Weidong said.

India and China have unresolved border disputes over Arunachal Pradesh and in Ladakh. Both have been engaged in dialogues to resolve the issue, but without any success so far.

The India-China border covers the 3,488 km-long Line of Actual Control (LAC), which mainly is a land border in most regions, but in Pangong Tso in Eastern Ladakh it passes through a lake. India controls the western portion of the 45-km long lake, while the rest is under Chinese control. Most of the clashes between the two countries have taken place in the Galwan Valley.