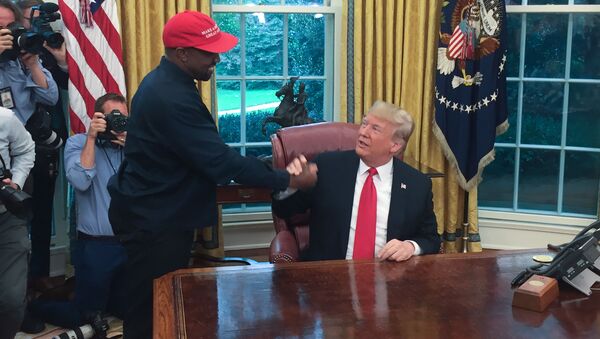 © AFP 2023 / Sebastian Smith
Subscribe
International
India
Africa
Lilia Dergacheva
All materialsWrite to the author
Donald Trump has addressed Kanye West's attempts to mount a third-party bid for the US presidency in the November elections, saying they they get along well, but he personally has nothing to do with his last-minute effort.

Donald Trump has lauded rapper and now presidential candidate Kanye West, but debunked rumours that he was helping GOP operatives collect signatures to get West's name on the ballot in a number of key states ahead of the November polls.

"I like Kanye very much, but no, I have nothing to do with him getting on the ballot. We'll have to see what happens. We'll see if he gets on the ballot. But I'm not involved", Trump asserted about West at a press briefing. The rapper visited the president in the Oval Office in 2018, wearing a signature MAGA hat, and has widely been considered to be on friendly terms with POTUS.

Separately, Trump went on to pay a compliment to his would-be rival's wife, Kim Kardashian West.

"She's got a good heart, a very good heart", Mr Trump said of the actress and socialite, adding that it was she who who prompted him to commute the sentence of a 63-year-old woman, Alice Johnson, serving a life sentence on drug trafficking charges.

The remarks come amid reports that multiple Republican campaign veterans are going out of their way to get West's name on the ballot in Colorado and Wisconsin in an apparent effort to divert votes away from Democratic presidential nominee Joe Biden. For instance, lawyer Lane Ruhland submitted West's election paperwork and petition signatures to have his name appear on the ballot in Wisconsin, a Vice report has it.

Also, Rachel George, a long-time Colorado-based Republican is purportedly working in a similar capacity to facilitate the West campaign in his state, trying to solicit signatures for the rapper.

"I have the most random favour to ask of you ever... would you help me get Kanye West on the ballot in Colorado? No, I am not joking, and I realise this is hilarious", Ms George wrote in an email to another GOP operative, obtained by Vice.

Separate reports suggest the musician had hired a company, Let the Voters Decide, to amass the necessary amount of voter signatures in 3 states, including Ohio, a key battleground state, to qualify to be on the ballot.

The hip-hop icon made a shock announcement voicing his intention to enter the political fray and independently run for the presidency in early July, but has since missed a number of deadlines to obtain a sufficient number of signatures to put his name on the November ballot.