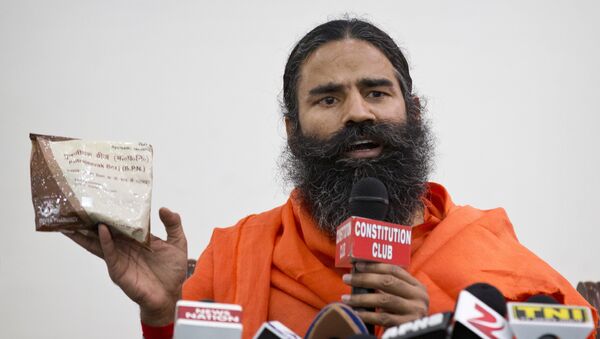 © AP Photo / Saurabh Das
Subscribe
International
India
Africa
New Delhi (Sputnik): Indian Yoga Guru Baba Ramdev-linked Patanjali Ayurved, which officially launched an Ayurvedic medicine and allegedly claimed that it was a cure for COVID-19, has made a U-turn and called it an immunity booster. The firm is now selling the medicine “Coronil” in Pantanjali’s megastores.

An Indian court has restrained the Ayurvedic company Pantanjali Ayurved from using their immunity booster’s name “Coronil” in an order over alleged trademark infringement and slapped a fine of INR one million ($13,345).

The court has ordered the Patanjali and the Divya Yog Mandir Trust to submit a fine of INR 500,000 ($6,674) each to the plaintiff companies Adyar Cancer Institute and the Government Yoga and Naturopathy Medical College and Hospital by 21 August.

"The defendants have invited this litigation on themselves. A simple check with the Trade Marks Registry would have revealed that 'Coronil' is a registered trademark. If they had, and had still, with audacity used the name 'Coronil', then they deserve no consideration at all", said Justice Karthikeyan in the Madras High Court.

A Chennai-based industrial equipment cleaning firm filed a civil suit and obtained the injunction. However, Patanjali filed a plea in the Madras High Court to vacate the injunction, restraining the company from using the brand name "Coronil" for tablets.

The justice added that Patanjali and its defendants have been projected that they are a $1.3 billion company and that they are “chasing further profits by exploiting the fear and panic among the general public by projecting a cure for the Coronavirus”.

The plaintiff company also accused Yoga Guru Baba Ramdev, associated with Patanjali, of making a false claim that Coronil tablets were a cure for COVID-19.