'I Like Naughty Girls': Giuffre Claims Epstein Got Aroused When She Told Him She Was Abused Before 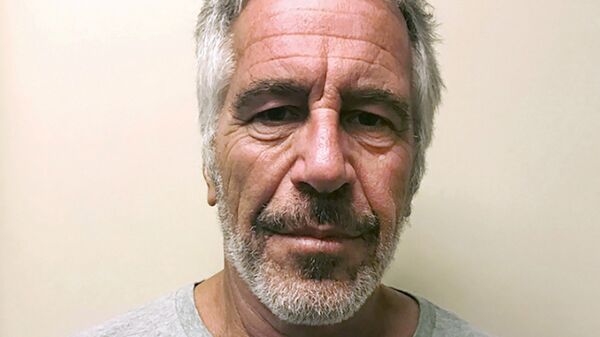 © AP Photo / New York State Sex Offender Registry
Subscribe
International
India
Africa
Max Gorbachev
All materialsWrite to the author
Virginia Giuffre, who also claimed she was forced to have sex with Prince Andrew, Epstein’s purportedly close friend, said she decided to flee the billionaire after he and his former girlfriend wanted her to become the mother of their surrogate baby.

Jeffrey Epstein’s alleged victim Virginia Giuffre has claimed that the late billionaire and his life companion Ghislaine Maxwell, got aroused when she told them she was sexually abused by a 65-year-old man. The claim was laid out in a manuscript where she detailed purported sexual abuse at the hands of Epstein and his powerful friends.

In the manuscript Giuffre recalled her first meeting with Maxwell and Epstein. In 2000, when she was 16 she was approached by Ghislaine Maxwell at Donald Trump’s Mar-a-Lago resort, where her father worked and helped her to get a job as a towel girl in the women’s changing rooms. Maxwell started a conversation with Virginia Giuffre (back then Virginia Roberts) as she noticed that the girl was reading a book on massage therapy. She told her she could offer her a job as a masseuse at a house of a billionaire friend. Virginia agreed and that same day she went to Epstein’s mansion.

After meeting him Giuffre began massaging Epstein together with Maxwell as part of a "trial" for the job. Then the pair asked her questions about her life and the girl revealed that when she was 13 she was sexually abused by a 65-year-old man. But instead of being shocked by her story Maxwell and Epstein got aroused, Giuffre claims.

"The funny thing was they didn't seem appalled at all by my statements, rather entertained if anything. Jeffrey called me a naughty girl with that wry smile of his, and half playful and half defensive, I answered 'no I'm not, I'm really a good girl, just always in the wrong places'. He then replied, 'It's O.K., I like naughty girls'", Giuffre wrote.

After that, Giuffre claims Epstein and Maxwell got naked and “before I had a chance to even think” Maxwell started undressing Virginia and the two then groped her. After Maxwell left the room, Epstein the sexually abused Giuffre, the woman claims in the manuscript.

Virginia Giuffre, who also claimed she was trafficked to London by Epstein and Maxwell where she was forced to have sex with the billionaire’s friend Prince Andrew, said she decided to flee sexual servitude after Epstein and Maxwell wanted her to become the mother of their surrogate baby. The pair even offered her a contract, under which she would have been taken care of for the rest of her life, but the baby would have legally belonged to Epstein and Maxwell.

Giuffre’s manuscript was initially part of a 2015 lawsuit that the woman filed against Maxwell after unsuccessful attempt to sue Epstein. The case against Maxwell was settled in 2017, with the 58-year-old reportedly paying Giuffre millions.

The manuscript was unsealed recently as Maxwell was arrested at the beginning of July by the FBI and was charged with grooming minors – one as young as 14 – for Epstein. The woman has pleaded not guilty to all charges and is now in prison awaiting trial.