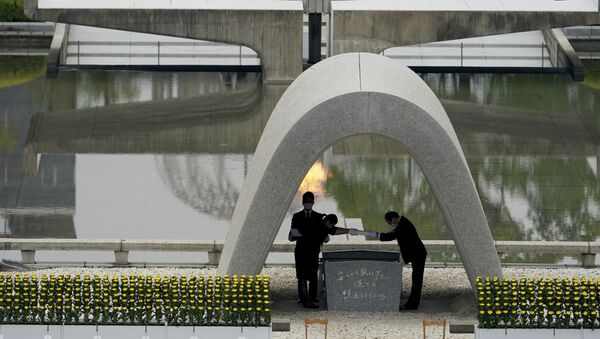 The global landscape changed forever at 8:15 a.m. on August 6 local time, when US B-29 warplane Enola Gay dropped a bomb nicknamed "Little Boy" on the city of Hiroshima in the southwest of Japan. Three days later, on 9 August, Washington detonated another bomb dubbed "Fat Man" over Nagasaki.

The US' goal was not only to hasten Japan’s surrender but also to showcase to the world — the Soviet Union in particular — the hugely destructive power of its new technology. Ultimately, the US nation became the first to use nuclear weapons against an enemy target.

Japan surrendered six days after the Nagasaki tragedy – on 15 August – and on 2 September, it formally signed the declaration.

'Year I Would Like to Forget': Hiroshima Survivor Opens Up on 75th Anniversary of Atomic Bombing

As a result of the attacks, the destructive power was displayed - while the images of pre-attack Hiroshima and Nagasaki show busy cities where ladies dressed in elegant kimonos walked along the streets and schoolchildren in uniforms running to schools, the post-tragedy images show rubble, bodies and destruction.

The final death tolls remain unknown. Over 200,000 people (approximately 120,000 in Hiroshima and 80,000 in Nagasaki) were reportedly killed in total, while hundreds upon hundreds of thousands of others across all of Japan have suffered radiation-caused health implications for generations.

'Pieces of Window Remain in my Grandma’s Arm'

Some 650,000 people have been recognised by the Japanese government as hibakusha, a term for those who were exposed to radiation from the nuclear bombings. Now the average age of the hibakusha is 83 years old and nearly 10,000 of them die every year according to the data from the Japan Confederation of A-and H-Bomb Sufferers Organisations (Nihon Hidankyo).

Sputnik managed to reach Ryoko Kubota, the organiser of “Hiroshima - 3rd Generation Exhibition: Succeeding to History.” The project sheds light on how the third-generation respond to their grandparents who experienced WWII and atomic bombings. She provided Sputnik with a photo of her hibakusha grandmother, Haruko Hihara, who is now 94 years old. At the age of 19, Hihara was at her house, 1.3 miles from the epicenter, when the US military dropped the bomb. She was exposed to radiation and the house was destroyed by the fire.

"She was blown away by the blast of the atomic bomb, and at the same time, many pieces of glass from the window pierced her right arm. She told me that the shards of the window still remain in her right arm", Ms. Kubota told Sputnik.

Haruko Hihara helped her injured aunt and rescued people trapped under the rubble, taking them by bicycle to the riverside.

"A lot of injured people gathered along the embankment, which was a famous spot for cherry blossoms, and the scenery turned red", Ms. Kubota wrote.

She admits that she first heard of her grandmother's experience when she was 32.

Junji Sarashina, President of the American Society of Hiroshima-Nagasaki A-Bomb Survivors (ASA), is another survivor of the Hiroshima bomb. Sarashina, a Japanese American, was in Hiroshima at the time of the 1945 bombing. He was 16 when the tragedy happened.

"The a-bomb will kill young and old and everybody who happened to be there. I’ve seen five-thousand, six-thousand dead people. Nuclear weapon will kill any human being regardless of age, sex, and we should stay away from nuclear weapons", according to comments from Sarashina, when he spoke to the media and provided to Sputnik by ASA.

Sarashina, who was 1.5 miles from the epicenter, received no physical injuries but sustained radiation poisoning. After the blast, he and some of his classmates spent the next two days wandering around the city.

"So, we started to walk. That’s when we started to see many dead people, wounded people, burned people. I happened to see a round black object. And mother was clinging on to this object. Mother was dead. Naturally, the infant was dead. 73 years later, I can vividly see the tie between the infant and the mother", he recalls, adding that he saw a lot of dead bodies and severely wounded people.

Illegal, Immoral, Never can be Justified

Speaking to Sputnik, Michael Christ, Executive Director at the International Physicians for the Prevention of Nuclear War organisation, said that any use of nuclear weapons constituted “a medical and humanitarian catastrophe,” and was “illegal, immoral and can never be justified.”

"The lesson of Hiroshima and Nagasaki is that nuclear weapons must never be used again, whether by design, accident or miscalculation.  Sheer luck, more than anything else, has helped the world avoid a nuclear war for the past 75 years", he said, adding that the luck will not hold forever and that the solution lies in the elimination of nuclear weapons.

The globe should remember what happened in Hiroshima and Nagasaki in 1945, since even small sized nuclear weapons can lead to devastation, pain and sufferings, Dave Webb, the Chair of the UK Campaign for Nuclear Disarmament (CND) told Sputnik.

Now people start to recognise the humanitarian effects and a huge cost of the weapons, Webb said, adding that similar tragedy can happen even nowadays.

"As international tensions rise and there remain thousands of nuclear weapons ready to be used – one tiny spark of misplaced aggression, accident or misunderstanding could lead to a huge human tragedy on a scale never seen before", he concluded.

Genocide that Happened in a Flash

Meanwhile, Linda Pentz Gunter from the Beyond Nuclear group told Sputnik that it was hard to imagine “any greater crime against humanity within such a short space of time.” While there were other larger genocides, including the Holocaust during WWII, there was “nothing of this size in one instant,” she added.

"The sight of burned babies crying by the side of the bodies of their mothers — as well as the prolonged and agonising suffering of those who survived the blast but died in the ensuing weeks of acute radiation sickness — should have been enough to turn the world against nuclear weapons. This is of course not what happened", she said.

Christopher Busby, a British scientist primarily studying the health effects of internal ionising radiation, told Sputnik that he still could not understand why the US government decided to drop two bombs on the cities.

"They dropped two: the key is that they dropped two, which were of completely different design and content. This shows that they wanted to see what these different bombs would do to the cities and their inhabitants. It was totally immoral", he said.

The Hiroshima bomb was uranium-bashed and thinly-shaped, while the Nagasaki bomb was a plutonium-based plump one.

Important to Listen to Hibakusha

In these hard times, people must not forget the real effects of the use of nuclear weapons and that is why remembering the victims of Hiroshima and Nagasaki should be of uttermost importance, Masako Toki, Senior Project Manager and Research Associate at James Martin Center for Nonproliferation Studies at Middlebury Institute of International Studies at Monterey, told Sputnik. Toki, who is from Japan, says that she strongly supports a world free of nuclear weapons.

"Also, as someone originally from Japan who has been privileged to listen to Atomic bombing survivors heart-wrenching, yet inspiring testimonials in my native languages many times, I strongly believe that it is extremely important for everyone, especially young generations, and national leaders to listen to their testimonials to understand the actual catastrophic impacts of the use of nuclear weapons", she said.

Toki admitted that the atomic bombing and the defeat in World War II changed Japan completely.

"Thanks to courageous atomic bombing survivors who shared their heart wrenching experiences, most of Japanese people support nuclear disarmament", she said.

Toki stressed that it is very important for younger generations to learn the impact of the use of nuclear weapons from the survivors. 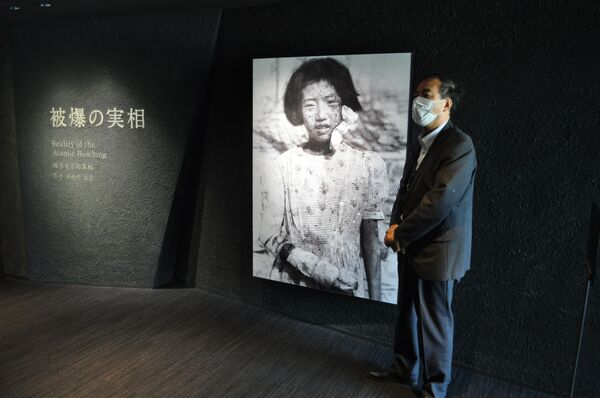 Meanwhile, Pentz Gunter added that now, 75 years on, the Japanese people are likely to experience more psychological than physical consequences of the tragedy.

"The Hibakusha (survivors of Hiroshima and Nagasaki) have made a point to speak out against nuclear weapons for 75 years. But there are fewer and fewer of them left alive now. It’s important that younger generations do not forget", she said.

Now, a new generation of hibakusha appeared – there are the survivors of the 2011 Fukushima-Daiichi disaster.  Again, they suffer from health impacts of the tragedy after the exposure to the so-called low doses of the radiation which contaminated lands and water in Fukushima.

"Culturally, some of them have suffered the same ostracisation as the Hiroshima and Nagasaki survivors also experienced", Pentz Gunter added.

According to Pentz Gunter, there are unfortunately too many reasons why a similar tragedy could happen again now.

“The cancelation of important disarmament treaties by the [US President Donald] Trump administration makes a new Cold War or even nuclear war more likely,” she said.

The situation between India and Pakistan, US and Russia’s upgrade of nuclear weapons – everything requires special attention, she added.

"Consequently, although there is a mistaken perception that the threat of nuclear war has subsided, we are in many ways in a more dangerous situation today than in the past. One could add that the compounding stresses of climate change are likely to further destabilise nations, leading to conflict which could also escalate into nuclear war", she concluded.

Meanwhile, Michael Christ recalled the recent tests of the US of a Minuteman III ICBM from Vandenberg Air Force Base, saying that these actions showed that Washington “remains committed to a political and military strategy of national and global suicide.”

"We call on the US and the other nuclear-armed states to join the community of nations who support the TPNW to seek a negotiated end to the existential threat of nuclear war", he said.

On Tuesday, the US army confirmed that it fired an unarmed nuclear-capable Minuteman III intercontinental ballistic missile (ICBM) to test readiness. The missile's three reentry vehicles traveled about 4,200 miles to the Kwajalein Atoll in the Marshall island.