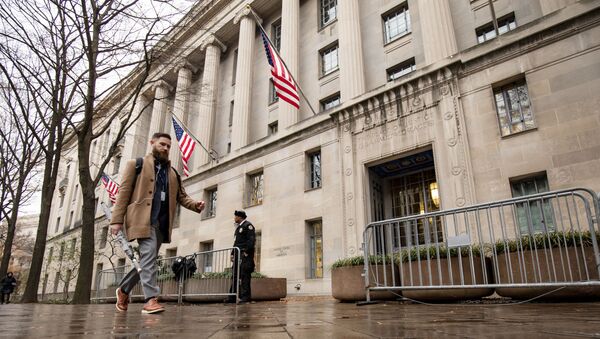 © AFP 2021 / Samuel Corum
Subscribe
WASHINGTON (Sputnik) - A former official at Citgo Petroleum Corporation, a Houston-based subsidiary of Venezuela’s state-owned energy company Petroleos de Venezuela SA, has been charged with involvement in a bribery and corruption scheme, the US Department of Justice said in a news release on Thursday.

"Jose Luis De Jongh Atencio, 48, a dual US-Venezuelan citizen is charged for his alleged role in laundering the proceeds of a scheme involving bribes made to corruptly secure business advantages from Citgo and PDVSA", the release read. "A federal grand jury in Houston returned the six-count indictment".

The indictment alleges that beginning in or around 2013 and continuing through at least 2019, De Jongh agreed to accept bribe payments from businessmen including Jose Manuel Gonzalez Testino, a dual US-Venezuelan citizen, Tulio Anibal Farias Perez, a Venezuelan national and Houston resident, and others, the Justice Department said.

The bribes were received from businessmen and companies conducting business with Citgo and PDVSA, the Department added.

De Jongh received over $2.5 million in bribe payments through the scheme. In return, he allegedly provided improper business advantages to Gonzalez and Farias to assist them with procuring Citgo and PDVSA contracts, according to the Justice Department.

000000
Popular comments
Gringos behave like the Nazi Germany before the invasion of Poland. Bullying others with baseless claims and accusing them of what they use on a daily basis such as "we lied we cheated we stole".