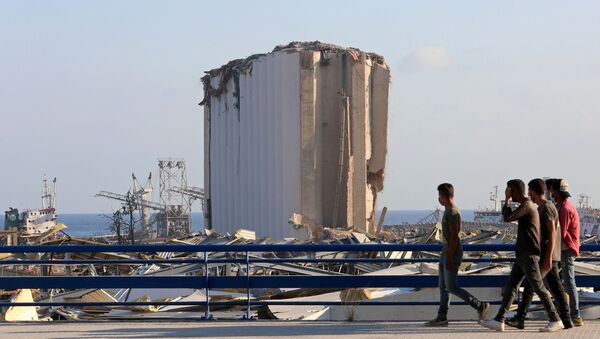 The explosion left at least 300,000 of the city's residents without a home, according to the Beirut governor, while the hospitals are overflowing with the wounded.

At least 137 people have been confirmed dead and 5,000 injured by Tuesday's explosion in the Lebanese capital, AFP reported, citing the Health Ministry. The authorities earlier estimated the number of those killed by the blast at around eighty people.

Officials previously suggested that the giant blast was caused by 2,750 tonnes of ammonium nitrate in the city port. According to Lebanese Prime Minister Hassan Diab, the explosive chemical material that detonated was stored at a port warehouse without due safety measures. 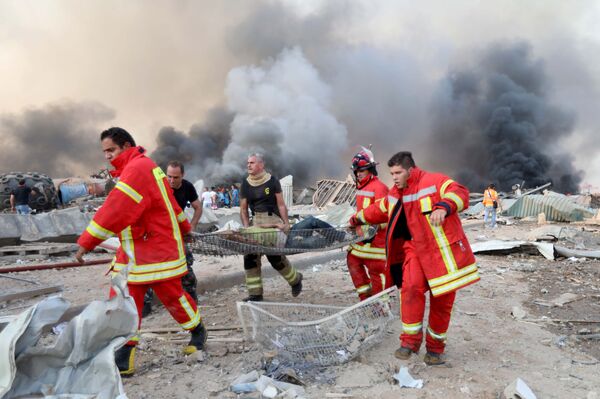 A man is evacuated at the site of an explosion in Beirut, Lebanon August 4, 2020.
© REUTERS / Mohamed Azakir

Following the incident, numerous countries offered to assist Lebanon. The Russian Emergencies Ministry sent planes to the devastated city, bringing an airmobile hospital, medics, rescue troops from the airmobile unit Tsentrospas, and a laboratory to detect COVID-19, as the pandemic is on the rise there.

The number of people, who have died as a result of the devastating explosion in Beirut, has increased to 149, the L'Orient-Le Jour newspaper reported on Friday.

Before that, media reported about 137 victims of the blast.

"We are preparing to deploy a mission to the affected area. Earlier, there were consultations between [search and rescue] teams and the local authorities about in what areas the help is needed", USAR.NL rescue team said in a statement.

The Netherlands has sent four USAR.NL search and rescue teams to assist in mitigating the aftermath of the explosion in Beirut. The mission consists of more than 60 rescuers, as well as eight rescue dogs.

"If reforms are not carried out, Lebanon will continue to sink", Macron said. "What is also needed here is political change. This explosion should be the start of a new era".

MOSCOW (Sputnik) - Russia's Ministry of Emergencies told Sputnik on Thursday that its helicopter-transportable hospital has started operating in the Lebanese capital of Beirut and will receive patients on a 24-hour basis.

"At 15:00 Moscow time [12:00 GMT], a hospital of the Tsentrospas rescue team started receiving injured people. The hospital will be operating round-the-clock for acute patients found during rescue operations, and on an ambulatory basis, between 08:00 and 20:00, for other patients", the ministry said.

Russia, along with other countries, is providing assistance to Lebanon, where a powerful explosion resulted in over 130 fatalities and 5,000 injuries earlier this week.

"I guarantee you this - aid will not go to corrupt hands", Macron told people in central Beirut. "I will talk to all political forces to ask them for a new pact. I am here today to propose a new political pact to them".

MOSCOW (Sputnik) – The deadly explosion that occurred in the Lebanese capital of Beirut on Tuesday took the life of a French architect and injured 24 other citizens of France, French authorities reported on Thursday.

"French architect Jean-Marc Bonfils died in the terrible disaster in Beirut. I pay tribute to his major work, such as the restoration of heritage buildings destroyed by the war in Lebanon. France and Lebanon are united in the grief of his death", French Culture Minister Roselyne Bachelot wrote on Twitter.

Another official, Jean-Baptiste Lemoyne, the secretary of state under the foreign minister, said live on the France Inter broadcaster that the Beirut explosion left 24 people of French origin injured, three of which were in critical condition.

He also highlighted that France had sent three planes to Lebanon as assistance. Lemoyne said that the planes had delivered some 20 tonnes of medical supplies and 70 people, including officials and rescue staff.

BREAKING: French President Emmanuel Macron has arrived in Beirut after an explosion in Lebanon's capital killed 135 people and injured around 5,000.

"I had to be here to bring this friendship, this brotherly love from our country to the people of Lebanon. I would also like to be able to listen and understand, and organise international aid, the support and the backing for Beirut and people of Lebanon", Macron said.

The French president added that two planes with emergency teams had already arrived.

"In the next few hours, I am going to the port, to speak with the rescue teams, speak with the NGOs, all of those who are on the ground and managing the emergency", he noted.

"This morning, a decision was taken to create an investigative committee which in four days maximum must provide a detailed report on responsibility - how, who, what, where? There will be judicial decisions", Foreign Minister Charbel Wehbe told Europe 1 radio.

"It is serious, and we take it seriously", he said. "Those responsible for this horrible crime of negligence will be punished by a committee of judges".

"The capacity of the state is very limited, and so is that of the central bank and the banks. We're not swimming in dollars", Raoul Nehme said in TV comments to Sky News Arabia.