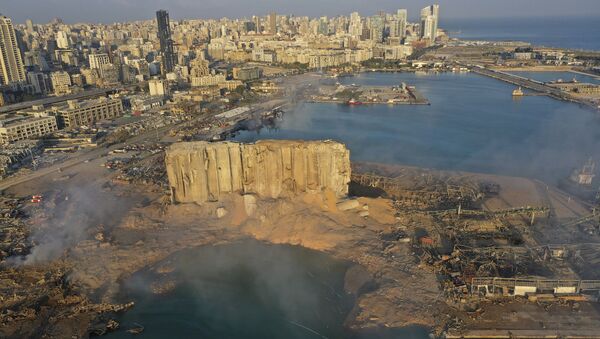 © AP Photo / Hussein Malla
Subscribe
Chris Summers
All materialsWrite to the author
The Lebanese government says 137 people were killed by a huge explosion in the port of Beirut on Tuesday but dozens more are missing and 5,000 people were injured. Now the focus is turning to the ship which brought the cargo of ammonium nitrate to Beirut in the first place.

The Lebanese authorities have placed several Beirut port officials under house arrest and the Supreme Defence Council has said those found responsible for mistakes which led to the 4 August explosion would face the "maximum punishment."

The disaster stems back to the arrival in Beirut on 23 September 2013 of a ship, the Rhosus, which was en route from Georgia to Mozambique with a cargo of ammonium nitrate fertiliser.

​The vessel, which flew under the Moldovan flag, had reportedly suffered mechanical problems and limped into port with its mixed Ukrainian and Russian crew battling with its engines and its owner.

A year later the Rhosus was still in Beirut, with its owner having apparently abandoned it and its crew, who had contacted the International Transport Workers' Federation in a bid to get their back pay and fly them home.

The ship’s cargo of 2,750 tons of ammonium nitrate was eventually moved to the port’s hangar 12. It was there, on 4 August, that it exploded after a fire was reportedly triggered by sparks from a welder’s torch.

​But the Rhosus and its hazardous cargo is - as Winston Churchill once said of Russia - "a riddle, wrapped in a mystery inside an enigma."

Nikolai Sukhanov, the head of a regional department of the Russian Seafarers' Union, told Sputnik on Thursday the Rhosus had been owned by a Bulgarian company.

He said: "According to official documents, as of August 2014, the shipowner is Bulgarian company Briar Wood Corporation, it is listed as the registered owner. When a 'flag of convenience' is used, a true shipowner is difficult to find. Documents are compiled the way that do not allow an owner of the vessel to be held responsible."

But the Spanish Transport Ministry has said the Rhosus - which reportedly arrived in Spain in July 2013 - had been owned by Teto Shipping Limited.

The Siberian Times and several other media outlets have claimed that despite the byzantine chain of companies the true owner of the Rhosus was a Russian businessman Igor Grechushkin, who reportedly now lives in Limassol, Cyprus.

Russia's Ren TV publish a photograph of Igor Grechushkin, the Russian/Cypriot owner of the Rhosus, a ship carrying 2,750 tons of ammonium nitrate abandoned in Beirut port in 2013. The same chemical caused yesterday's explosion. He's currently believed to be in Cyprus. pic.twitter.com/omXrXuGPgX

​Mr Sukhanov said: "Beirut paid attention to the condition of the ship, found technical issues and reported that it was necessary to bring the Rhosus' condition to normal, but the shipowner said that he had no money and abandoned the ship" and the authorities then offloaded the cargo and put it in the warehouse.

Shipping is often an immensely complex industry with ships being owned and leased by individuals or corporations, often through shell companies.

When ships get old they are increasingly difficult to maintain and it is not uncommon for their owners to abandon them or even deliberately wreck them for insurance money or scuttle them for their scrap metal value.

On its website the International Maritime Organization (IMO) said 366 ships had been abandoned between 2004 and 2018, with 4,866 seafarers left stranded in a foreign port.

Of those cases, 52 were still unresolved in December 2018.

​The IMO said: "Seafarer abandonment is a serious problem that can blight the lives of those caught up in it. It must be tackled and it needs continual cooperation, not just between IMO and…non-governmental organisations devoted to seaman’s welfare, but with flag states, port states and other industry groups too. We all have a human duty to protect seafarers."

As for hazardous cargos they are covered by the International Maritime Dangerous Goods Code, which was adopted in 1965.

The IMDG Code is recognised by 150 countries around the world and 98 percent of shipping.

Ammonium nitrate would be covered by the code's Classification Five - "substances that have the chances of oxidisation."

When ammonium nitrate oxidises it causes a highly explosive exothermic reaction, as was seen so dramatically in Beirut.

An IMO spokesperson told Sputnik that once the cargo was on land it became the responsibility of the Lebanese authorities.

It is highly unlikely the Lebanese government would be able to sue the ship's owners for the estimated US$3 billion damage done to Beirut, partly because of the port officials' own failures to keep the ammonium nitrate in safe storage.

000000
Popular comments
The quote from Mr Sukhanov makes it seem that the cargo was removed into storage straight away. Other sites are reporting that the the cargo remained on the ship in Beirut harbour for 10 months. The captain of the ship was reported as telling the government or port authorities that he was 'sitting on a powder keg'.
ian
6 August 2020, 14:51 GMT4
000000
Try to focus on the Zionazi drone that started the reaction instead. There is only one "country" in the world that benefits from this.