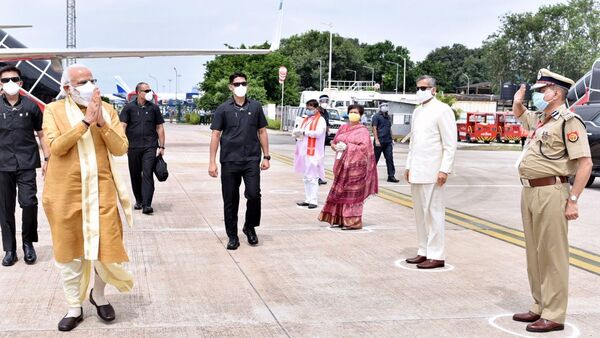 © Sputnik
Subscribe
New Delhi (Sputnik): The foundation of the Ram Temple is finally being laid down in the holy city of Ayodhya in Uttar Pradesh. This comes after a landmark verdict of the Supreme Court in November last year ordering the construction of the Ram Temple at the disputed site and for an alternative plot of land to be granted to Muslims to build a mosque.

Although Indian Prime Minister Narendra Modi was not the most prominent face behind the Ram Temple agitation, there were several veteran Bharatiya Janata Party leaders who played a big role in the nationwide movement. The absence of these prominent faces at the Ram Temple ceremony at Ayodhya is largely being viewed as an anomaly.

Nilanjan Mukopadhyay, a political analyst and author of "Narendra Modi: The Man, the Times", tells Sputnik that these leaders are simply not being promoted by this government.

"This regime consists of leaders of who did not participate in the Ayodhya agitation. So they want Ayodhya event participation in their political CV. The history will record that I (they) laid the foundation stone of this (event)", Mukopadhyay said.

While invitations were extended to Kalyan Singh and Vinay Katiyar, the names of M.M. Joshi and L.K. Advani remained missing even from the invitee list - citing age factor as a reason.

When asked why they weren't invited, Mukopadhyay said, "There is a complete smokescreen and Mr Advani is totally silent about whether he was invited or not. I think we can presume that Mr Advani and Joshi were conveyed that they are not welcomed. That there is not really need for them to come there".

L.K. Advani remains in the spotlight for not attending the event because the "Rath Yatra" (a chariot procession) led by him in 1990 from Gujarat's Somath to Uttar Pradesh Ayodhya played a catalytic role in turning the agitation into a mass movement, which eventually also led to the demolition of the Babri Masjid in 1992.

Similarly, M.M. Joshi was the BJP chief when the Babri demolition took place over the dispute, wherein Hindus claimed that the 16th century mosque built by Mughal Emperor Babur was constructed after destroying a Ram Temple at the site.

Responding to the Ayodhya ceremony, Advani called the event a fruition of his log-time dream, which is now being fulfilled.

"A grand Mandir for Shri Ram at Ram Janmabhoomi has been a desire and mission for the Bharatiya Janata Party. I feel humbled that during the Ram Janmabhoomi movement, destiny made me perform a pivotal duty in the form of the Ram Rath Yatra... which helped galvanise the aspirations, energies and passions of its countless participants", Advani said in a statement.

It was only after the Rath Yatra movement that the BJP resurrected itself in Indian politics and enhanced its electoral tally from two to 85 seats in the Indian Parliament in 1989.

Moreoever, the issue of the construction of the Ram Temple was propagated by the Modi-led government, which also included it in the BJP's manifesto, making it one of the reasons for the party's sweeping victory in the 2014 and 2019 general elections.