‘How Can You Say Accident?’: Trump Reiterates Possibility That Beirut Blast Was an ‘Attack’ 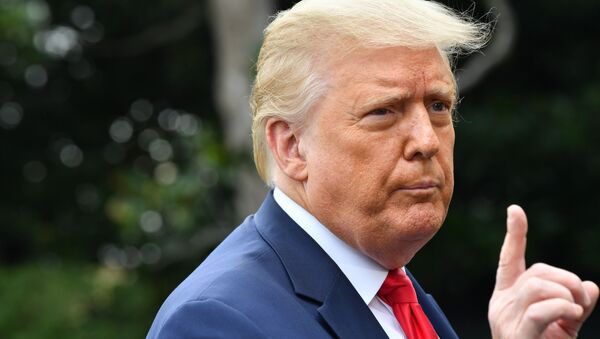 © AFP 2021 / NICHOLAS KAMM
Subscribe
During a news conference Wednesday, US President Donald Trump reiterated the possibility that the explosion in downtown Beirut, Lebanon, on Tuesday was an attack.

"How can you say accident? Somebody left some terrible explosive type devices and things around ... perhaps it was that. Perhaps it was an attack. I don't think anybody can say right now. We're looking into it very strongly. Right now, you have some people think it was an attack and some people that think it wasn't. In any event, it was a terrible event," Trump said during the briefing.

However, earlier Wednesday, US Defense Secretary Mark Esper voiced a different opinion, stating that most of the country's military experts believe the massive explosion was an accident, not a bomb, like Trump has insinuated.

Trump first suggested that the blast in Beirut was part of an "attack" during his Tuesday afternoon COVID-19 briefing.

"It would seem like [an attack] based on the explosion. I've met with some of our great generals and they just seem to feel that it was. This was not some kind of a manufacturing explosion-type of event. This was, seems to be, according to them, they would know better than I would, but they seem to think it was an attack," Trump added.

Based on currently available information, the blast in Beirut's port is believed to have been related to stockpiles of ammonium nitrate, a highly explosive chemical. The chemicals, stored at the facility for six years after being confiscated from a ship in 2013, are believed to have detonated after a fire started near the port.

Both Israel and Hezbollah, a militant group based in Lebanon, have denied any involvement in the explosion.

The blast killed at least 135 people, wounded around 5,000 and demolished numerous buildings in the city within seconds. The explosion comes as Lebanon grapples with factional fighting, government corruption, hyperinflation, a refugee crisis and the COVID-19 pandemic. With Lebanon relying on imports for around 80% of its wheat supplies, the destruction of the port could be a devastating blow to the country's food security, the Associated Press reported Wednesday.