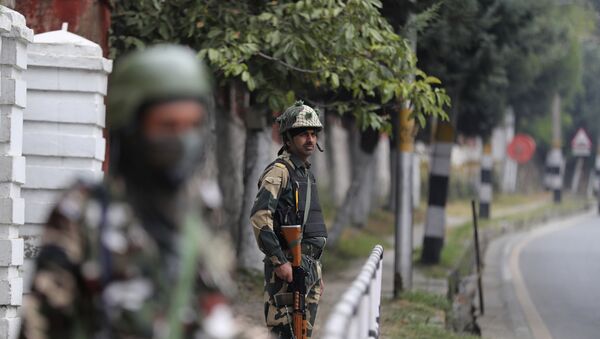 © AP Photo / Mukhtar Khan
Subscribe
Advitya Bahl
All materialsWrite to the author
New Delhi (Sputnik): Over the last several years, the Indian government has been keeping an eye on miscreants involved in anti-national activities in the country. The government is taking measures to ensure law and order.

The Jammu and Kashmir government has initiated a process to terminate the services of employees involved in anti-national activities.

Sources in the Jammu and Kashmir authority told Sputnik that between 500 and 1,000 government employees, “posing threat to security and integrity of the State”, could be dismissed in the next two or three months.

"It has been learnt that several government employees are proactively participating in promoting anti-India hatred, assailing Indian Government's decision on Article 370, trolling and threatening politicians, government officers and business tycoons on social networking sites including Facebook, Twitter, WhatsApp and others", the official told Sputnik.

On 30 July, the General Administration Department (GAD) of Jammu and Kashmir invoked Article 311(2) (c), a special provision of the Constitution of India, for the purpose of terminating the services of the employees or reducing their ranks without holding an inquiry, but on the basis of relevant records and other collateral evidence.

The article was not applicable to Jammu and Kashmir earlier when it enjoyed the special status granted to it under Article 370 of the Indian Constitution.

Dispensing with some of the previous checks and balances, the GAD order reads: “The recommendations in respect of such cases shall be supported by relevant records which may include a copy of the interrogation report and other collateral evidence to justify dispensing with the holding of an inquiry in the interest of security of the State”.

According to the official, the Law Department and GAD would process and scrutinise the cases, but the opinion of the Home Department and police would be pivotal in taking a decision.

“Concrete and tangible evidences collected by different agencies against employees who are promoting anti-India narrative and soon their termination orders from their services will be given out to them”, the official added.

He said that the Jammu and Kashmir government is determined to take tough action against such employees who are fanning violence and creating law and order troubles on the ground by their physical participation.

As per officials, there are currently 450,000 government employees in Jammu and Kashmir. In a preliminary inquiry, the investigation agency has found evidence that several employees were involved in mocking law and order issues.

An official stated that several employees have been found involved in raising anti-India slogans, stone pelting, and other unlawful activities frequently.