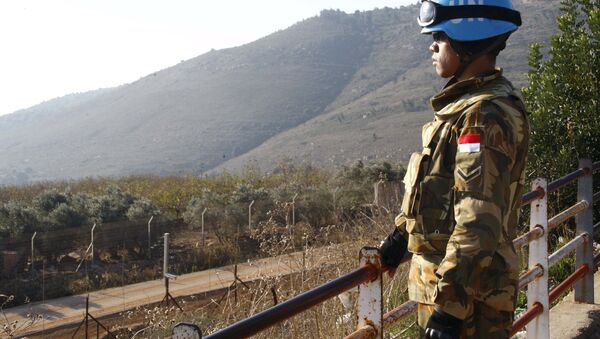 The United Nations peacekeeping force in Lebanon announced late on Tuesday that one of its ships and several of its naval peacekeepers had been injured in the explosion at the port of Beirut.

"As a result of a huge explosion that rocked Beirut Port this evening, one of the UNIFIL ships of the Maritime Task Force docked in the port was damaged, leaving some UNIFIL naval peacekeepers injured – some of them seriously," the United Nations Interim Force in Lebanon (UNIFIL) announced on Tuesday.

The press release noted UNIFIL was assessing the situation and the injured peacekeepers were being sent to the hospital for treatment.

Around 20 Bangladesh Navy sailors from the BNS Bijoy corvette injured in Beirut port blast. One in critical condition, five moderately wounded).
The Castle-class corvette deployed in Lebanon to support the UNIFIL's MTF ("Maritime Task Force") was moderately damaged by the blast pic.twitter.com/iPv5Is7UbU

​“We are with the people and the Government of Lebanon during this difficult time and stand ready to help and provide any assistance and support," UNIFIL Head of Mission and Force Commander Major General Del Col said.

The explosion Tuesday afternoon in a warehouse at the Port of Beirut totally destroyed the port area and much of downtown, killing at least 73 people and injuring several thousand. It is not currently believed to be the result of a terrorist attack, but rather sodium nitrate being stored at the port. The Lebanese supreme defense council has declared the city disaster-stricken and a national day of mourning has been declared for Wednesday.

The international peacekeeping force was dispatched to the Levantine country in March 1978 to ensure Israel properly withdrew from southern Lebanon following its invasion as well as to ensure the area returned to Beirut's control. Despite two subsequent conflicts between Israel and Lebanon, some 10,200 UNIFIL soldiers from dozens of countries have remained.