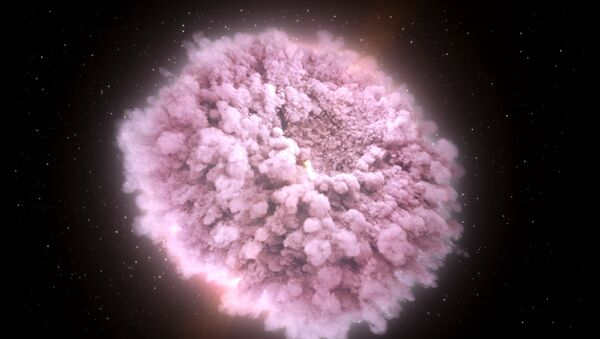 © NASA
Subscribe
Lilia Dergacheva
All materialsWrite to the author
The supernova from 1987 was a truly spectacular event well observed from Earth, however multiple efforts to catch a glimpse of the resulting neutron star have hitherto led to nothing.

Astronomers have finally captured on camera a dead star, glowing from a thick cloud of dust at the centre of a supernova remnant left after a massive star, Sanduleak -69 202, died in a jaw-dropping supernova 33 years ago, visible at the time even with the naked eye.

The results of the survey have been published in The Astrophysical Journal.

During the time of the grand collapse, astronomers failed, to their bewilderment, to find any trace of the expected newborn neutron star.

Last November, a team of researchers led by Phil Cigan of Cardiff University in Wales announced that they had finally found a hot, bright blob in the remnant's core, thanks to the Atacama Large Millimeter/submillimeter Array in Chile. They believed the new find in the depths of the universe  corresponded to the neutron star shrouded by a thick cloud of dust.

"We were very surprised to see this warm blob made by a thick cloud of dust in the supernova remnant. There has to be something in the cloud that has heated up the dust and which makes it shine. That's why we suggested that there is a neutron star hiding inside the dust cloud", explained astrophysicist Mikako Matsuura, as cited by Science Alert.

Yet, a problem arose as whatever was beaming inside the blob looked too bright to be a neutron star. In a new paper, Page and his team have theoretically demonstrated that the glowy blob might indeed be a neutron star. Its brightness appeared to be consistent with thermal emission observed from a very young neutron star - in other words, it's still really, really hot from the earlier supernova explosion. The newly determined neutron star was named NS 1987A.

"In spite of the supreme complexity of a supernova explosion and the extreme conditions reigning in the interior of a neutron star, the detection of a warm blob of dust is a confirmation of several predictions", Page said.

The temperature, around 5 million degrees Celsius, is one of those predictions. Another is the star's location. It's not exactly at the centre of the supernova, but travelling away from it at a velocity of up to 700 kilometres per second (435 miles per second).

The neutron star in question provides a perfect glimpse of stellar evolution, as it's now believed to be the youngest neutron star ever known: the second youngest is inside supernova remnant Cassiopeia A, which is 11,000 light-years away, and which famously exploded in the 17th century.

According to astronomer James Lattimer of Stony Brook University, the detected neutrinos suggested that a black hole never formed at the place, and moreover it seems "difficult for a black hole to explain the observed brightness of the blob". "We compared all possibilities and concluded that a hot neutron star is the most likely explanation", he summed up.

000000
Popular comments
They do that those Neutron thingymabobs , they are real real sneaky they are , they are well know to be Hiding in Plain sight ! , deliberately . They might possibly be worse than the Orange Blob , no one seems to see it plainly , imo of course .