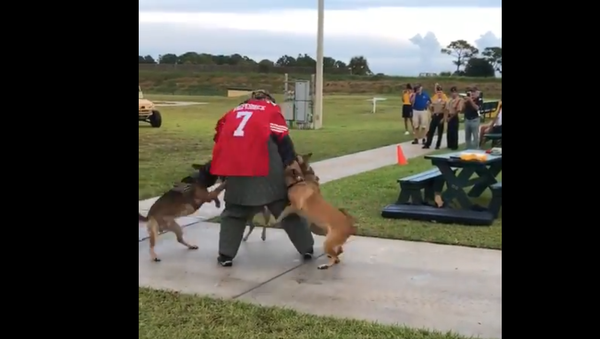 Video of the event, which occurred in 2019 at the National Navy SEAL Museum near Ft. Pierce, Florida, was republished on Twitter on August 2 by Florida-based documentarian Billy Corben, who presumably quoting the linked Instagram post, noted that the “Kaepernick stand-in” was featured during a fundraiser.

A total of four dogs are unleashed on the man in the first clip.

The crowd at the event is overheard laughing as the man in the jersey, who is wearing heavily padded clothing, says that he will stand around the 20-second mark of the second video.

In another video, after “Navy SEALs and Navy SEAL dogs take down Colin Kaepernick for not standing during National Anthem,” he moans something like, "Oh man, I will stand” #BecauseFlorida https://t.co/uZ3ervZguB pic.twitter.com/6vi1uCGIt5

Kaepernick notably led a kneeling movement in the National Football League (NFL) to protest police brutality against Black people. His form of protest during the national anthem performances before NFL games was construed by some to be disrespectful to the American flag and US service members.

US President Donald Trump referred to Kaepernick, and others who knelt during the anthem, as a “son of a b***h” during a 2017 address in Alabama while campaigning for then-Sen. Luther Strange (R-AL).

Trump wishes NFL owners would tell anthem protesters "get that son of a bitch off the field right now" pic.twitter.com/gq4EH3lNoY

“The inherent message of this video is completely inconsistent with the values and ethos of Naval Special Warfare and the US Navy,” read a tweet issued by the US Navy SEALs’ official Twitter account.

“We are investigating the matter fully, and initial indications are that there were no active duty Navy personnel or equipment involved with this independent organization’s event.

According to the Washington Post, the videos were first published to Instagram in January 2019, but it would appear the account or posts in question have since been deleted, as the links provided by the outlet return the message: “Sorry, this page isn’t available.”

Despite its name, the Navy SEAL Museum is not directly affiliated with the US Navy. Furthermore, the museum is designated as a 501(c)(3) nonprofit organization.

“The main objective of the Museum remains the promotion of public education by providing the opportunity to explore the history of the Navy SEALs through interactive exhibits,” claims the museum website.

Circulation of these videos comes just days after the nonprofit organization Robert F. Kennedy Human Rights announced that Kaepernick would be one of five individuals honored with the Robert F. Kennedy Ripple of Hope Award. According to the July 27 news release on the matter, the award is issued to “outstanding changemakers who are working to advance equality, justice, and human rights during extraordinarily challenging times.”