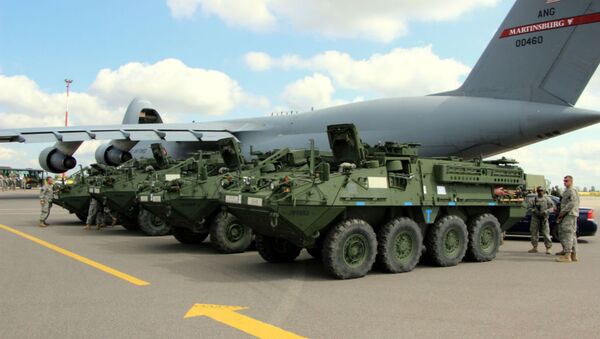 © Flickr / PROPennsylvania National Guard
Subscribe
A modified version of the Stryker infantry carrier vehicle built to carry anti-air missiles will soon be tested in upcoming live-fire drills by the US Army.

The US Army has already begun a limited user test of its new Integrated Air and Missile Defense Battle Command System (IBCS) at New Mexico’s White Sands Missile Range. Those tests will now enter a live-fire stage as the Army brings in two new systems for testing: a new version of its MIM-108 Patriot missile battery and the Interim Maneuver Short-Range Air Defense (IM-SHORAD), a modified version of the Stryker, Brig. Gen. Brian Gibson, director of the Army’s air and missile defense modernization team, told Breaking Defense for a Monday report.

The essence of IBCS 2.0 will be the networking of different air defense systems. According to the Center for Strategic and International Studies’ (CSIS) “Missile Threat” project, the IBCS is “intended is to integrate the communications between weapon launchers, radars, and the operators, allowing an air defense unit, such as a Patriot battery, to fire its interceptors using information provided by the radar of another.”

The IM-SHORAD will fill a key gap in US air defenses, which have for decades prioritized targeting ballistic missiles and strategic bombers over short-range perimeter defense. The proliferation of drones on the battlefield in Syria, Iraq and Afghanistan, as well as the September 2019 suicide drone attack on two Saudi oil facilities, rushed short-range air defense to the top of the Pentagon’s list of concerns.

Enter the IM-SHORAD. With Stinger and Hellfire missiles as well as a 30-millimeter autocannon and a 360-degree multi-mission hemisphere radar, the Stryker could fill a vital gap. The eight-wheeled, armored vehicle can hit 60 miles per hour on roadways and hard surfaces and can go offroad as well, making it a potent way to quickly move anti-air systems into new areas and displace them from old ones.

The US Marine Corps has weighed a similar modification of its Joint Light Tactical Vehicles (JLTVs), which will replace the service’s Humvees. The Direct Fire Defeat System could potentially include anti-air missiles such as the FIM-92 Stinger as well as a 30-millimeter autocannon and a suite of electronic warfare tools, Sputnik reported in April.

The onset of the COVID-19 pandemic delayed the White Sands tests, which required extensive reworking in order to minimize the risk of spreading the disease. It’s just the latest delay for a system that should have gone active last year, Defense News noted. The Pentagon’s budget for upgrading the weapons systems of both anti-air and regular Stryker vehicles has also come under scrutiny, with the House Armed Services Committee questioning the fairness behind the awarding of contracts that were included in the 2021 National Defense Authorization Act in June.

One day, the IM-SHORAD will get a less clinical name which, as Task & Purpose reported, has the potential to be derived from the fictional Manticore missile-armed tank from the “Warhammer 40,000” tabletop gaming franchise, depending on how many votes the suggestion gets.