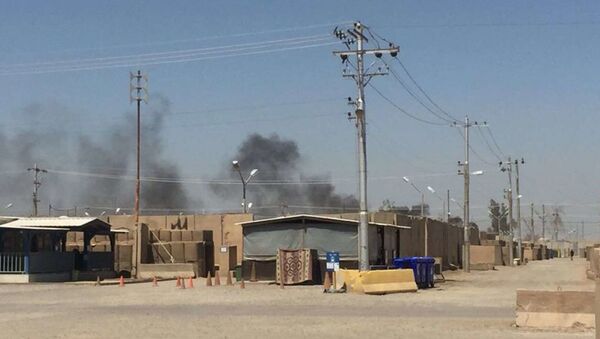 © Fox News
Subscribe
International
India
Africa
MOSCOW (Sputnik) – Two rockets fell in the vicinity of Iraq’s Taji military base, which is located north of the Baghdad capital and hosts US-led coalition troops, but did not explode, Al Sumaria broadcaster reported on Monday.

"The security forces found two rockets near Camp Taji and in the vicinity of the district of Al Moshahda", a source told Al Sumaria broadcaster, adding that the landing did not result in a blast.

Video: US-Led Coalition Plane Overshoots Landing, Crashes Into Barrier at Iraq's Taji Airbase
The base repeatedly comes under rocket fire attacks, as does Baghdad's international airport and the so-called green zone of the Iraqi capital, where government buildings and embassies are located.

The most recent attack on Camp Taji took place late on 27 July. The explosion follows in the wake of several incidents that have taken place over recent weeks. On 20 July, the Camp Taji military base, which hosts US-led coalition troops to the north of Baghdad, came under rocket fire.

The Majid al Tamimi airbase in the northern province of Saladin was also targeted on the same day, the Iraqi news agency Shafaq reported.