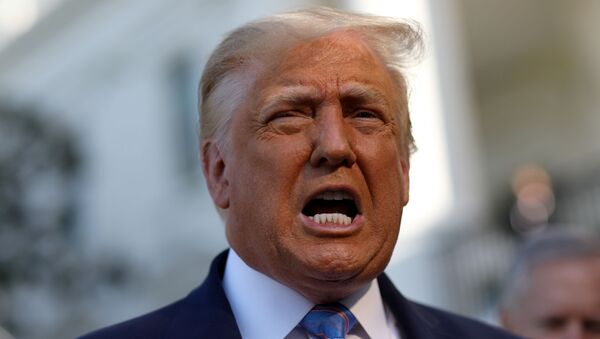 © REUTERS / Leah Millis
Subscribe
US President Donald Trump dismissed the ongoing investigation into his personal finances, calling it part of a continuing "witch hunt" by the Democrats.

The New York District Attorney's Office on Monday filed new documentation aiming to refute the argument by Trump's lawyers that a subpoena of his finances has no bearing. That document, Sputnik reported, revealed the investigation may go far beyond the money trail of "hush payments" given to several women to ensure their silence about past liaisons with Trump, and might include financial crimes such as bank and insurance fraud.

“There’s nothing I know even about it … I know nothing about it," Trump told reporters at the White House on Monday.

“This is a continuation of the worst witch hunt in American history," the president continued.

Trump also told reporters his administration would be filing a lawsuit against the state of Nevada over a bill passed by lawmakers over the weekend that will mail all registered voters in the state mail-in ballots for the November election.

Repeating his mantra that mail-in ballots enable voter fraud, Trump called the Nevada bill "a great embarrassment to our country" and promised to oppose it in court. He also argued the US Postal Service, which has dramatically reduced service recently in an effort to plug budget shortfalls, would be overwhelmed by millions of mail-in ballots.

The president also said on Monday he would soon be signing an executive order aimed at expanding health care access in rural areas.

The proposal includes additional funding for rural hospitals via the departments of Agriculture and Health and Human Services, but also support for a telehealth system for some Medicare recipients that could become permanent after the COVID-19 pandemic recedes.

"We're seeing numbers that nobody can even believe," Trump told reporters about the percentage increase of telehealth use. Doctors, psychiatrists, therapists and other health professionals have resorted to video and phone calls with patients in recent months in order to safely provide routine care for individuals, but especially the elderly and other populations vulnerable to COVID-19.