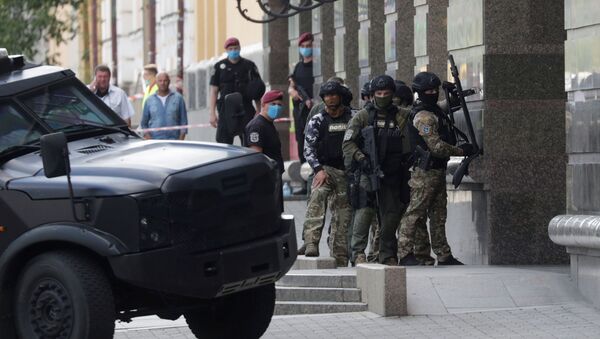 Live Updates: Man Threatening to Blow up Bank in Kiev Has Been Detained

Subscribe
KIEV (Sputnik) - Ukraine's Security Service (SBU) on Monday said it had detained a man who threatened to blow up a bank department in a business centre in downtown Kiev.

Earlier in the day, Ukrainian Deputy Interior Minister Anton Gerashchenko said he could not confirm claims that the malefactor had requested 40,000 hryvnia ($1,400).

"The bank staff have left the building, the head of the department volunteered to stay. A special police operation named Grom ['thunder'] is underway. The police have launched talks with the terrorist", the deputy minister said on his Facebook page.

According to the minister, a representative of the bank called the police and told them a man in his 30s had entered the building, said he had a bomb in his backpack, and asked to call law enforcement in.

On 21 July, 44-year-old man Maksim Krivosh hijacked a bus with 20 passengers in the centre of Lutsk. The hostage-taker had explosives and weapons. The police then launched an operation called "Hostage" to deal with the situation. According to the regional national police chief, Yury Kroshko, the attacker put forth general demands and complained about the political system. In particular, he demanded that President Zelensky urge citizens to watch the movie "Earthlings”. After about 12 hours, the hijacker eventually released all the hostages and was detained by the police.

"Bomb experts conducted an examination on the spot. No explosive objects were found there. This means that this citizen of Uzbekistan was bluffing", Gerashchenko told the 112 Ukraine broadcaster.

Ukraine's Deputy Interior Minister says that the security forces have detained the hostage-taker.
“The explosion did not happen. Explosives technicians are working on site”, Gerashchenko said, adding that the attacker faces a long prison sentence.

Ukrainian law enforcement agents have taken the man out of the building, put him in a car and left the site, according to the live broadcast of ZIK TV channel. 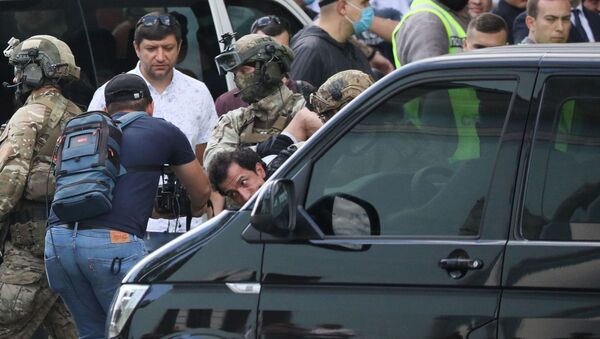 According to the Ukrainian Security Services' Telegram channel, only one person is still being held hostage in the bank building in Kiev.

Other hostages have been already evacuated, the situation is under control, the statement says. The attacker is demanding media presence, according to the security services.

A special operation plan of the State Security Administration called “Boomerang” has come into force, the deputy interior minister said.

The operation has been completely taken over by the Security Service, he said, adding that the police are assisting the security service in protecting the public safety of the special operation.

Ukraine’s Deputy Interior Minister Anton Gerashchenko said in a statement that the man threatening to detonate a bomb in a bank in Kiev is a citizen of Uzbekistan.

"Judging by his social networks, he is a mentally unstable person. The terrorist said that his backpack has a large explosive charge that will explode if he dies", the minister said.

000000
Popular comments
Another woefully failed state thanks to the $7 billion the US boasted it had spent on ousting the elected prime minister / president in 2014. I see the US is getting a double dose of its own medicine. Karma.