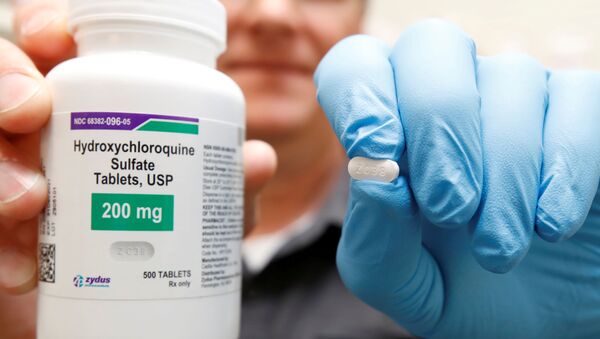 US President Donald Trump has long promoted the use of the anti-malarial drug hydroxychloroquine as a treatment for the ongoing coronavirus. Testing the drug for use in treating COVID-19 has, however, been blocked by international health bodies which have noted the compound's adverse effects on patients.

An official in the US government pandemic response team on Sunday affirmed that there is zero evidence that hydroxychloroquine is a workable treatment for the COVID-19 coronavirus, despite President Donald Trump's lauding of the anti-malaria drug as a solution.

Speaking on NBC's "Meet the Press," a Trump administration testing figure, Brett Giroir, said he is unable to support hydroxychloroquine as a treatment as trials "do not show any benefit".

"We need to move on from that and talk about what is effective”, said Giroir, an assistant secretary at the Department of Health and Human Services.

Girour suggested that the drug, the testing of which has been halted by the World Health Organisation, would rarely be prescribed to patients. This corroborates claims by Dr. Anthony Fauci, the nation's leading infectious disease expert, who also rejected hydroxychloroquine as a treatment.

"There may be circumstances, I don't know what they are, where a physician may prescribe it for an individual, but I think most physicians and prescribers are evidence-based and they're not influenced by whatever is on Twitter or anything else", Giroir added.

"And the evidence just doesn't show that hydroxychloroquine is effective right now".

Chuck Todd: "The president continues to advocate for hydroxychloroquine. Is that a danger to public health?"

Assistant Secretary for Health Brett Giroir: "At this point in time we don’t recommend that as a treatment... hydroxychloroquine, I can't recommend that." pic.twitter.com/UDplFefaBq

​Despite the response by the administration official, Trump continues to push the drug as a COVID-19 treatment.

Trump, in a series of tweets and statements in recent weeks, has asserted that "many doctors think it is extremely successful, the hydroxychloroquine coupled with the zinc and perhaps the azithromycin".

The president posted a now-discredited video showing doctors standing on the steps of the US Supreme Court in Washington DC promoting the use of the drug. Donald Trump Jr, the son of the president, also shared the video, which resulted in his suspension from Twitter.

Great times with @TuckerCarlson last night discussing my recent twitter ban for posting a video of Doctors talking about hydroxychloroquine. Obviously there is no limit to what they will do to push their narrative. pic.twitter.com/fCmfnf5CbI

​According to a 15 June statement from the Federal Drug Administration, “[The] FDA has determined that CQ [chloroquine phosphate] and HCQ [hydroxychloroquine sulfate] are unlikely to be effective in treating COVID-19 for the authorized uses in the EUA [Emergency Use Authorization]".