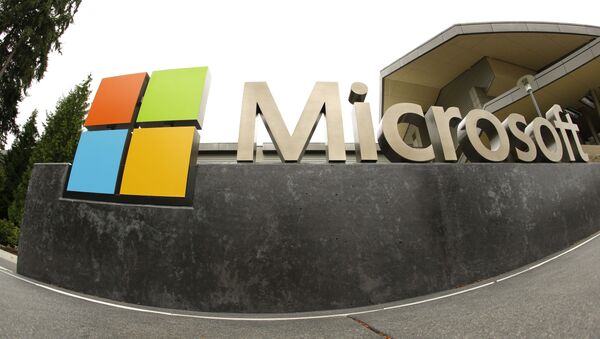 © AP Photo / Ted S. Warren
Subscribe
Earlier in the week, US President Donald Trump announced his intention to ban the Chinese-owned viral video platform TikTok in the United States amid allegations that the app "spies" on American citizens and could be used to "meddle" in the US presidential election.

Microsoft revealed in its official blog that the company is committed to continuing discussions with the White House over purchasing TikTok, after a conversation between Microsoft CEO Satya Nadella and President Donald Trump.

The company noted that the talks would "in any event" be completed "no later than 15 September".

"Microsoft will move quickly to pursue discussions with TikTok’s parent company, ByteDance, in a matter of weeks, and in any event completing these discussions no later than 15 September, 2020. During this process, Microsoft looks forward to continuing dialogue with the United States Government, including with the President", the company's statement said.

The company said further updates would be revealed when there is a "definitive outcome" to the discussions. The statement also outlined that Microsoft would "move quickly" to pursue discussions with TikTok's parent company, ByteDance, which will be built "upon a notification made by Microsoft and ByteDance to the Committee on Foreign Investment in the United States (CFIUS)".

"The two companies have provided notice of their intent to explore a preliminary proposal that would involve a purchase of the TikTok service in the United States, Canada, Australia, and New Zealand and would result in Microsoft owning and operating TikTok in these markets", Microsoft said.

The new structure is promised to stick to the "experience TikTok users currently love", while "adding world-class security, privacy, and digital safety protections". Microsoft also vowed to ensure that all private data of American citizens is kept in the United States, noting that in cases when such data is "stored or backed-up" outside the country, the company will make sure it is deleted after being transferred to the US.

Expressing appreciation for the participation of the White House in the talks, the tech giant noted that "there can be no assurance that a transaction which involves Microsoft will proceed".

The announcement of the possible deal between Microsoft and ByteDance, earlier reported by several media outlets, comes after Trump voiced his intention to ban the Chinese-owned video app in the United States. It also marked Microsoft's first official statement on the matter.

TikTok, while keeping silent about reported dealings with Microsoft, responded to Trump's tweets by asserting that it does not "plan on going anywhere", offering instead that it would contribute to the US job market and insisting that all American user data is kept in the United States.

The app's promises did not stop US State Secretary Mike Pompeo from again insisting that "Chinese software companies are feeding data directly to the Chinese Communist Party", echoing concerns raised by some US lawmakers that the app "spies" on American citizens and could "meddle" in the US presidential election.

On Friday, The New York Times reported that Microsoft was considering the purchase of TikTok amid increasing pressure on Capitol Hill against the app. TikTok has been prohibited for use by active duty US military personnel and for federal employees using government-issued devices. The prohibitions were decreed under a pretext that TikTok presents a threat to national security due to allegations that it has ties with Chinese intelligence - claims that TikTok has denied.