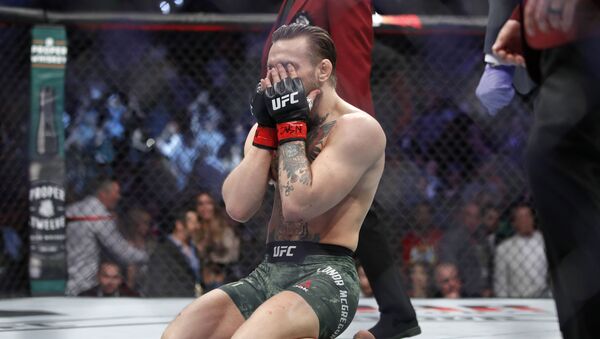 © AP Photo / John Locher
Subscribe
On 7 June, Irish professional mixed martial artist and boxer Conor McGregor announced via social media that he was retiring from fighting. The sportsman, a former Ultimate Fighting Championship (UFC) featherweight and lightweight champion, was the 10th in the UFC men’s pound-for-pound rankings and 4th in the UFC lightweight rankings as of mid-July.

Irish retired UFC superstar Conor McGregor was left “crying and completely devastated” following his first MMA loss in 2008 at the hands of Lithuanian fighter Artemij Sitenkov, a multiple winner of European championships in various sports, the latter claims in a book published in late-May in France.

In 2008, Sitenkov defeated the 19-year-old McGregor with a knee bar, costing The Notorious the first loss in his MMA professional career.

The Lithuanian fighter claims in the book that McGregor cried in the octagon following the matchup.

“Conor tried to get into my head during the weigh-in. But I was not impressed at all because this is something we do in my country,” Sitenkov said. “Conor stayed on the ground for a few minutes. He was crying and he was completely devastated. I had to go to his dressing room to try to cheer him up and he was still crying when I got in.”

The book, titled ‘Obsessions’, was written by French journalist Charles Thiallier about the Irish former UFC lightweight and featherweight champion. The writer traveled to Crumlin, Ireland, McGregor’s hometown, in search of a better understanding of the former UFC champion.

“Even though I know he is not that popular right now in Ireland, I think that whether we like him or not, in 10 or 20 years' time he will have his name among the most influential sports people of his generation,” Thiallier wrote. “He is the guy who made MMA popular around the world, he is the face of the UFC and he probably changed the sport forever”.

In early June, he announced via social media that he was retiring from fighting, although he has done so twice before during his career.

On Thursday, the Irishman was called out by undefeated rising UFC star Khamzat Chimaev. Responding to the Swedish fighter's call, McGregor tweeted “I accept”.

UFC President Dana White told reporters on Friday that he is not interested in a McGregor-Chimaev bout, because the Irish fighter is now retired, adding that even if McGregor returned, there would be other more relevant fights.