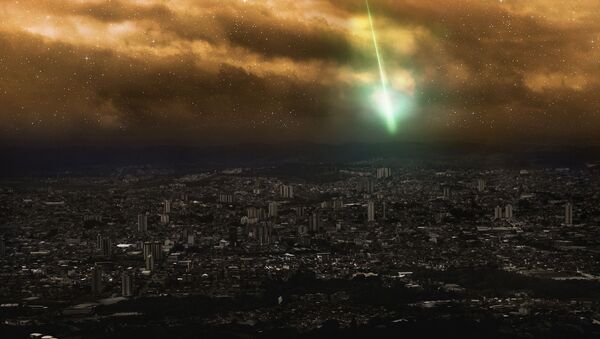 CC0 / /
Subscribe
The process Professor Schmitz devised to extract ancient micrometeorites from the limestone they were preserved in relied on these space rocks' incredible hardiness.

While searching for meteorites that crashed into our planet may be a challenging task in itself, Professor Birger Schmitz, a geologist from Lund University in Sweden, has apparently discovered a method to hunt for an even more elusive quarry – small meteorites that impacted the Earth millions of years ago.

As online magazine Horizon points out, the search for fossil meteorites presents a "whole new level of difficulty" for scholars, as these space rocks are not "spread thinly" across the surface but rather "entombed in ancient rocks", like dinosaur fossils.

Back in 1990, Schmitz, who did his postdoc with the team of Luis Alvarez, the Nobel Prize laureate who first proposed a theory about a massive asteroid impact putting an end to the age of dinosaurs, turned his attention towards the Thorsberg quarry on the southern shore of Lake Vänern, where another geologist, Mario Tassinari, had found "a few fossil meteorites".

During that time, there were only "a handful of fossil meteorites known to science", the media outlet notes, adding that Schmitz's subsequent efforts revealed that the Thorsberg quarry turned out to be a one-of-a-kind trove of these space rocks, as "special conditions are required to preserve sizeable fossil meteorites in reasonable numbers".

Professor Schmitz arrived at the conclusion that since micrometeorites, or space dust, shower Earth in large quantities every day, the limestone in the quarry probably contains a fair share of them, and since chromite, is "extremely resistant”, he came up with a peculiar extraction method.

"I told my poor student at the time, "Niklas, take 5 kilograms of rock and dissolve it in hydrochloric acid'", the professor said.

The process yielded 10 tiny fragments of extraterrestrial chromite, each about a tenth of a millimeter in length, and subsequent extractions “revealed there was a huge uptick in space dust in 466 million year old rock", with Professor Schmitz concluding that “a massive collision in the asteroid belt spewed out both large meteorites and a gargantuan cloud of dust”, blocking the sunlight and plunging the Earth into an ice age during the Ordovician period.

He added that his team has amassed quite a collection of ancient meteorites, though "it won’t be published for a few months".

"(Many of) these meteorites are as different from the meteorites that fall today as some of the animals that were living in that time are compared to today’s animals", Schmitz said.