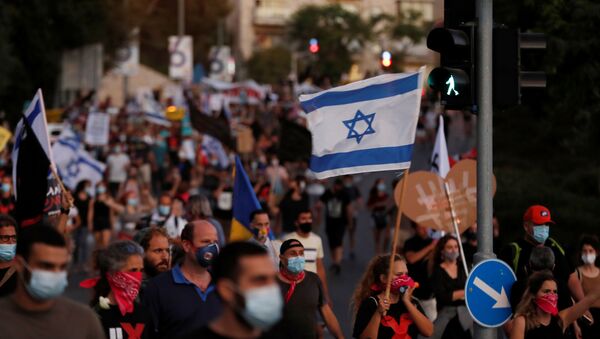 Israel’s new unity government was sworn in on 17 May 2020, following a deal made by political rivals Benjamin Netanyahu, leader of the Likud party, and Benny Gantz, leader of the Blue and White Party. Under a power sharing agreement, Netanyahu will remain as Prime Minister for 18 months, before Gantz takes over in October 2021.

Israel’s coalition chairman, MK Miki Zohar, said that the country’s government is unable to function and is about to fall apart, due to the main coalition parties’ disagreements on a number of issues.

In an interview with local radio station Kan, Zohar said that "The feeling right now is that it doesn't matter what we do, it's about to be over between us [Likud] and Blue and White.”

“There is a gaping abyss between us and Blue and White on many topics on an ideological level and we cannot really function as a functioning coalition. This is like a couple who wants a divorce and are about to sign on it any minute,” he suggested.

According to the Jerusalem Post, the biggest issue at the moment for the coalition is passing a budget. After Prime Minister Benjamin Netanyahu and Alternate Prime Minister Benny Gantz signed the coalition deal in May, they had promised that the unity government would pass a two-year budget, but both parties are struggling to come to an agreement.

Netanyahu is currently pushing for a one-year budget, while Gantz does not want to back down from the two year agreement stipulated in the coalition deal.

If Israel does not pass a budget by 25 August, it will mean an automatic election in November.

“We aren’t really managing to function as a good coalition,” Zohar stated, “Since at the moment there is no stability in the coalition, the deterioration will only continue.” He did not rule out, however, the possibility that the situation may improve. “We are at a critical juncture where we need to decide where we are heading,” Zohar said. “If the decision taken by Gantz and Netanyahu is that we aren’t continuing to have a government — we’ll need to try to establish an alternative government or go to elections.”

Another looming disagreement involves a controversial opposition bill that would allow the Knesset (the legislative branch of the Israeli government) to overrule the High Court. Zohar said that he would seek Netanyahu’s backing to pass this legislation that will be proposed by the Yamina Party next week. Gantz’s Blue and White Party has said that it would oppose this bill and have advised the Likud party to do the same.

There have also been tensions over the country’s current anti-government protests calling on Netanyahu to resign due to his criminal trial for corruption. Nentanyahu has condemned the protests as anti-democratic, while Gantz has supported them, saying they have the right to protest.