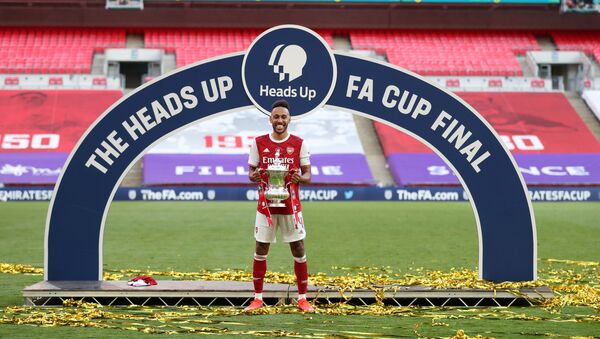 © REUTERS / CATHERINE IVILL
Subscribe
The long-anticipated FA Cup final took place this weekend, with Chelsea and Arsenal supporters both hoping for the victory. The result adds to a long string of championship wins and European league qualifiers for The Gunners.

Arsenal secured itself as the FA Cup champions on Saturday, as Pierre-Emerick Aubameyang scored both goals in the 2 - 1 win against Chelsea and a place in the Europa League.

​Chelsea began the game on high ground, with Christian Pulisic scoring the first goal over the head of Emiliano Martinez, the second United States national to get a ball in the back of the net during an FA Cup final, the first being Carli Lloyd with Manchester City in 2017.

​Pulisic scored just five minutes after Mason Mount passed it into the box and it was placed comfortably in his line of sight by ex-Arsenal forward Olivier Giroud.

It appeared that Arsenal had made a prompt early comeback 25 minutes in when Nicolas Pepe put a hit from outside the box and into the top corner, past Chelsea keeper Willy Caballero.

CHRISTIAN PULISIC WITH THE DANCING SHOES TO SCORE IN THE FA CUP FINAL! pic.twitter.com/kOBA9cZFw9

​The score was deemed offside, before Pepe reached the goal and replay footage proved that Ainsley Maitland Niles was in front of The Blues defence.

Arsenal found its opportunity a minute later after Cesar Azpilicueta took Aubameyang down in the box and referee Anthony Taylor issued a penalty.

At the 28-minute mark, Aubameyang equalised the playing field. Azpilicueta saw an end to his game after leaving the pitch in tears after the Chelsea captain suffered a pulled hamstring at 34 minutes by Andreas Christensen.

Cesar Azpilicueta is a club legend, i dont want to hear otherwise. Respect or leave. Always passionate, always gives everything for this club. My captain 💙💪🏻 pic.twitter.com/zD00wIxsbv

​Frank Lampard also served as a replacement in the beginning of the second half, after Pulisic pulled his hamstring.

The first 20 minutes of the restart saw a drop in momentum before Aubameyang crashed the ball into the net over the top of Ceballos, after a pass from Pepe.

Chelsea saw their spark diminish six minutes later after Mateo Kovacic received a second yellow card and was removed from the game after a sliding tackle against Granit Xhaka.

Chelsea dropped to a team of just nine in the game's final moments after Pedro went down in agony and was given oxygen before being removed on a stretcher.

Arsenal's win makes it the team's 25th year of qualifying for the Europa League. The Gunners coach, Mikel Arteta, said prior to the game that an FA Cup victory was essential to maintaining Arsenal's talisman.

Not everyone was happy with the decision, however.

Very annoying that all the Arsenal fans supporting Taylor, the shameless referee in today's Chelsea V Arsenal FA Cup final are also criticising Buhari & INEC for rigging election. What's the difference between 6 and half a dozen? Cheating! Condemn it.
Chelsea till cow lay egg

​This FA Cup March marks the third time Arsenal and Chelsea have clashed in the finals, with Arsenal beating Chelsea before the 2017 and the Blues emerging victorious in last year's Europa League final.