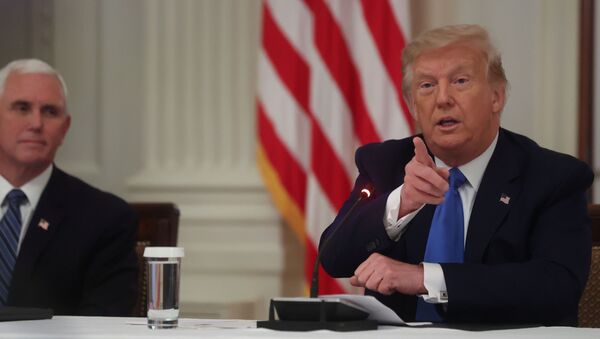 On Thursday, Trump suggested delaying the November 3 election due to concerns about possible mail-in fraud and the novel coronavirus disease (COVID-19) pandemic.

Trump explained later that he does not want to delay the presidential election on 3 November, but also wants to avoid a rigged vote if mail-in ballots are allowed due to COVID-19.

“It is not possible to delay the election for any reason. Federal law sets November 3 as the date of the general election, and only US Congress could change this date, not the president,” University of New Mexico Political Science Professor Lonna Atkeson told Sputnik.

The constitution significantly limits the ability of Congress to delay choosing the next president since under no circumstance can any president’s term be extended past noon on January 20th of the next year without approving a special amendment, she added.

US history does not know examples of delaying general elections, even during the Civil War, Atkeson reminded.

“If 20 January were reached and there was no election, the president would have to leave office,” she said. “I am still betting we are a nation of laws.”

“President Trump’s stated reasons are to provide a safe environment for voters and to avoid potential voter fraud that may result from mail-in voting," Rasmussen said. “Both are reasonable concerns that one would consider.  However, it is not his decision and definitely would set a very poor precedence.”

The expert supported in person voting but allowed for alternative methods. He also suggested an existence of hidden causes for Trump to oppose mail-in voting.

“There may be additional reasons to include buying time to address both the virus, economic and security impacts, hence potentially narrowing the gap between the President and his opponent Joseph Biden,” Rasmussen said.

Meanwhile, it is up to the states to address those issues to ensure the security and the reliability of the vote, he added.

The US constitution allows to approve an amendment either by the Congress with a two-thirds majority vote in both the House of Representatives and the Senate or by a constitutional convention called for by two-thirds of the State legislatures.

The US President does not play any role in the amendment process and even does not get joint Congressional resolution for signature or approval.

Richard Martin
2 August 2020, 04:55 GMT
000000
Richard Martin, what it will do is kick off a Civil war. It will be a grossly embarrassing to have Trump carted out of WH under arrest for treason.