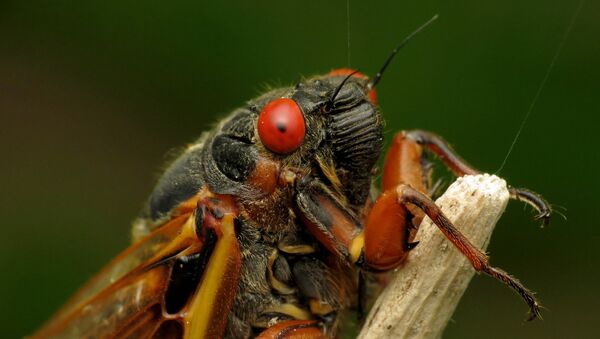 Andrei Dergalin
All materialsWrite to the author
While the scientists did manage to identify some of the chemicals in the fungus, the exact mechanism that the organism employs to control its hosts is yet to be explained.

Researchers studying a parasitic fungus called Massospora, which uses cicadas to reproduce and spread, have revealed the insidious tactic this organism implements to make insects do its bidding, Live Science reports.

The scientists managed to establish that the fungus not only "eats away" at its host's abdomen while keeping the insect alive, its active host transmission (AHT) phase involves it compelling the infected male cicadas to flick their wings in a particular way, mimicking the motions females use to attract mates; healthy insects who get lured in this manner then attempt to mate with the infected cicadas and become infected themselves.

"To our knowledge, this is the only example of AHT in which the pathogen behaves at least in part as a sexually transmitted disease," the researchers note, pointing out that as transmission "sometimes happens when males attempt to copulate with other males", as the media outlet puts it.

The team also points out that while they did identify "some of the chemicals in Massospora fungus", the exact mechanism its spores use to control their hosts are yet to be explained.

"These discoveries are not only super cool but also have a lot of potential in helping us understand insects better, and perhaps learn better ways to control pest species using fungi that manipulate host behaviors", said study co-author Angie Macias, a doctoral candidate from West Virginia University.

She added that "it is almost certain that there are undiscovered Massospora species, never mind the other AHT (active host transmission) fungi, and each of these will have developed its own intimate connection with its host's biology".