What Can China Do to Ensure Financial Security in Case It's Disconnected From SWIFT? 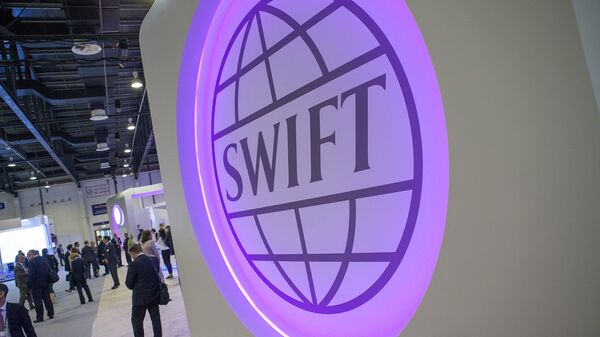 Chinese financial experts began to actively discuss the possibility of the country's disconnection from SWIFT after US President Donald Trump signed the Hong Kong Autonomy Act, which provides for sanctions against Chinese officials and the financial institutions that serve them.

Although the majority of experts agree that such a scenario of actions from the US is unlikely, there are increasing calls for China to prepare alternative ways of interacting financially with the rest of the world that don't involve SWIFT.

Washington has not yet disclosed exactly what sanctions could be imposed on Chinese officials and banking structures. But from the very beginning, China has not ruled out a worst-case scenario. Some Chinese officials have started talking about the need to get rid of dollar dependence as soon as possible and promoting the internationalisation of the yuan.

First, Fang Xinghai, Vice-Chairman of China Securities Regulatory Commission, warned of the danger of China's disconnection from the dollar system and SWIFT international payment network in case of the escalation of tensions between China and the United States.

Then similar concerns were expressed by Guo Shuqing, director of the China Banking and Insurance Regulatory Commission. Finally, Zhou Li, former head of the International Liaison Department of Central Committee of the CPC, also stated the need to get rid of dollar dependence as soon as possible.

Today, the vast majority of all international payments from China are denominated in dollars. The yuan accounted for only 19% of China's total international payments in 2019. However, the use of China's Cross-border Interbank Payment System (CIPS) is not yet widely used. For example, CIPS processed $19.4 billion worth of transactions per day last year. By comparison, SWIFT runs $5 trillion worth of transactions per day.

Under such circumstances, China certainly considers the possible consequences of disconnection from the international SWIFT system. Moreover, there have already been precedents. North Korea and Iran were disconnected from SWIFT causing serious complications in the process of trade and international settlements with these countries.

The European Union even had to develop an alternative system INSTEX for settlements of European countries with Iran. The system started functioning at the beginning of this year. However, according to the Iranian side, it is not very effective and does not replace the completely eliminated mechanisms for settlements after the disconnection of Iran from SWIFT.

SWIFT Is Still US Mechanism

Technically, SWIFT is a multilateral institution with headquarters in Belgium. SWIFT is a cooperative society working under Belgian law owned by SWIFT members. However, in practice, it turns out that the US increasingly spreads its jurisdiction over SWIFT and uses it as a tool to implement its sanctions policy. Therefore SWIFT is strongly influenced by the US. This explains China's concern about the reliability of this system, Xu Xuemei, a researcher at the Centre for World Economy and Development of the China Institute of International Studies, said.

“The US has repeatedly forced SWIFT to implement sanctions against DPRK and Iran. As SWIFT is the most important part of the international financial infrastructure, it cannot ignore political factors and hegemony of the American dollar. So, SWIFT is likely to remain the mechanism of the United States to implement its financial sanctions”, the expert said.

SWIFT is an international body founded and operated under Belgian law. SWIFT is managed and controlled by the board of directors. But the majority in the board of directors belongs to the representatives of the USA and the West. Therefore they have a significant influence on SWIFT, Xu Xuemei said.

“The chairman of SWIFT is an American representative. The Managing Director is European. Such an organisational structure does not promote fairness and neutrality of SWIFT in the process of decision-making. Here it is necessary to adopt the IMF's concept of quota system reform in order to strengthen the voice of developing countries”, the Chinese expert further noted.

IMF quotas are periodically reviewed to ensure that the mechanism of the multilateral organisation better reflects the needs of developing countries. But reform has been progressing too slowly for some members. Russia, China, and several other countries, including the BRICS members, have repeatedly stressed the need to accelerate IMF reform in order to strengthen the influence of developing countries. According to Xu Xuemei, international payment systems also require similar reforms.

However, from the standpoint of the institutional framework, SWIFT is formally subordinate to European laws, not to the US. The problem, rather, is that the role of the dollar in the world financial system is still very large. That is why, despite all organisational formalities, SWIFT and other multilateral organisations cannot effectively ignore US opinion. Otherwise, they risk facing US sanctions themselves, which may be very sensitive given the scale of the US currency usage in the world.

Therefore, the main task is to reduce dependence on the dollar and make the global financial system more diversified, says Shi Jiayou, Professor of Law School from the Renmin University of China.

“Since the vast majority of international settlements are tied to the dollar, SWIFT will not be able to get rid of its dependence on the US. And it is hardly possible to expect any serious reforms under the current situation. We should actively promote the diversification of the international financial system, get rid of the hegemony of the dollar as soon as possible, and accelerate the internationalisation of the yuan”, the professor said.

Germany, France, and the UK established  INSTEX in 2019 to bypass American sanctions in settlements with Iran. According to Shi Jiayou, China should actively study other countries' experience and think about creating its mechanism with similar functionality.

“We need to further develop the CIPS system in the future and accelerate its promotion in the world. It is necessary to combine this process with the development of the Belt and Road Initiative, to encourage the use of the yuan in price formation and settlements, at least among the countries participating in this initiative”, Shi Jiayou stressed.

In practice, the transition to settlement in national currencies and, consequently, to alternative payment systems is difficult in the short-run precisely because of the stable status of the dollar as a world currency. This is because multi-currency settlements imply an increase in the risks associated with currency fluctuations. Taking into account the uneven global trade flows, it is possible to effectively hedge the existing risks in national currency settlements through swap arrangements.

Similar agreements are in force between Russia and China, as well as with several other countries. However, it is difficult to fully switch trade to such a system simply because all countries sell and buy different quantities of goods and services.

Russia Reportedly Surpassed US in LNG Exports to China in June

On the other hand, China is the world's largest trade partner. The dependence in the US-China relationship is bilateral. Therefore, a negative scenario in which China will be disconnected from the international payment system is unlikely. Because in that case, the US itself will suffer irreparable damage, expert Xu Xuemei said.

Speaking of disconnecting China from SWIFT, the expert stressed that the possibility of such a development is extremely small as neither China nor the US is likely to take such a step.

“It is very difficult to cut off Sino-US trade relations artificially. Many American enterprises and financial organisations operate in Hong Kong. US sanctions against mainland China or Hong Kong will not only be seriously opposed by China but will cause irreparable damage to US companies and American financial stability”, the expert said.

Xu Xuemei further assured that China will certainly prepare for the worst. In particular, China is developing its digital currency, which can be used for cross-border settlements.

“But most importantly, the US and China must take into account their own and mutual interests, resolve their differences through dialogue and cooperation, and not embark on a path of financial war that would be devastating for all”, he concluded.

To get rid of the hegemony of the dollar in the global financial system, fundamentally new mechanisms for international settlements are needed. One such mechanism could be a digital currency, which allows making cross-border payments almost instantly and does not require a complex financial infrastructure of correspondent banks.

The People's Bank of China has been working on the digital yuan for several years, and according to the regulator, the crypto yuan is almost ready to be launched. So far, the digital Chinese currency is being tested on a limited scale in four regions of the country and, at first, will be intended for domestic settlements.

According to the Central Bank of China, the Crypto Yuan will replace cash in circulation and will have the same sovereignty as the fiat yuan. If the project is successful, China will be the first major financial power to put a state digital currency into circulation. This would open up new horizons on the difficult path to the internationalisation of the yuan.