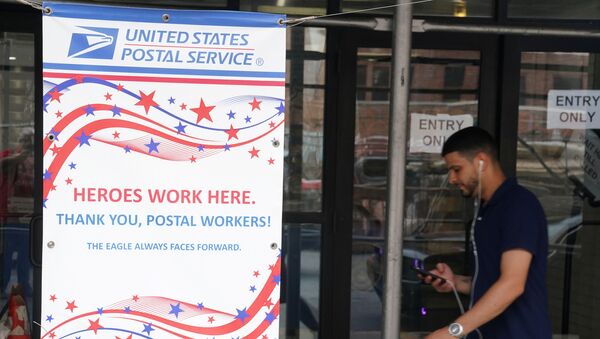 © REUTERS / Carlo Allegri
Subscribe
American voters are rushing in growing numbers to vote by mail amid the coronavirus pandemic, but recent delays in mail delivery sparked concerns that some absentee ballots might not be counted in time during the election.

Top Democrats and some postal workers are concerned that current mail delivery delays across the US may affect the looming presidential election, as states are increasingly resorting to mail-in voting to adapt to the pandemic.

The Washington Post reports that the US Postal Service has seen days-long backlogs of mail across the country, attributed to recent cost-cutting efforts by the new Postmaster General, Louis DeJoy.

Postal Service officials have previously warned that the debt-laden agency will run out of money by the end of September without help from Congress due to a fall in the volume of first-class mail.

On Wednesday, the US Treasury agreed to lend USPS $10 billion, included in congressionally-approved coronavirus relief legislation, in exchange for information on its contracts with private-sector shippers.

DeJoy, a top Republican fundraiser appointed by Trump in May, this month announced a series of measures to cut $200 million in costs incurred by overtime pay and extra transportation. 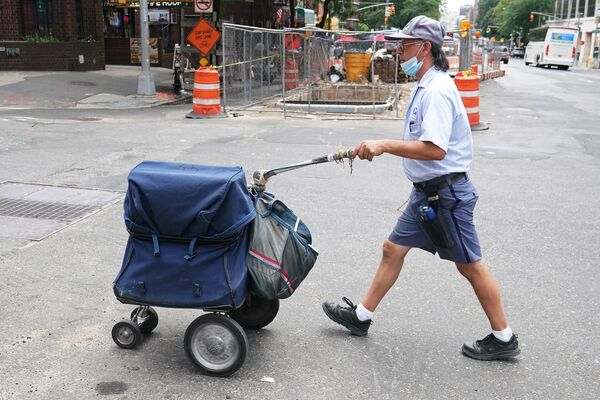 Democrats have expressed concern that delayed mail delivery in several states, including battleground ones like Wisconsin, Michigan, North Carolina and Pennsylvania, is part of a Republican-led effort to disenfranchise those who will vote by mail.

For instance, in Michigan, where the primary is due on Tuesday, clerks have been reporting complaints from voters about long waits for absentee ballots. State authorities have urged voters to mail their ballots immediately or to drop them off at their local drop box out of concern that their vote may not be counted in time.

In a letter to DeJoy on Thursday, four Democrat Senators including Minority Leader Chuck Schumer wrote that his failure to report the new changes to Congress “undermines public trust and only increases concerns that service compromises will grow in advance of the election and peak mail volumes in November.”

“The cardinal rule is, ‘don’t delay the mail,’ and we’re in a 180-degree switch where we’re delaying mail every day,” she told The Washington Post, adding that the system is “going to be a catastrophe” if it is not fixed before election season.

A spokesman for the Postal Service said that the new policy aims to ease the financial pressure on the agency and is not meant to slow down the delivery of mail or election ballots.

“Of course we acknowledge that temporary service impacts can occur… but any such impacts will be monitored and temporary,” he said, denying claims that DeJoy doesn’t take directions from President Donald Trump.

Trump has criticised the Postal Service as a “joke” and suggested recently that the agency cannot be trusted to deliver ballots. On Thursday, he floated the idea that the general election should be delayed because the increased use of mail-in ballots across the United States this year would lead to widespread fraud.

A slew of lawmakers, including Republicans, have openly rejected the idea and maintained that the election should go as planned.

“Never in the history of the country, through wars, depressions and the Civil War, have we ever not had a federally-scheduled election on time. We'll find a way to do that again this November 3rd,” said Senate Majority Leader Mitch McConnell.

The Trump administration is fighting legal battles in at least 13 states, where the Democrats are seeking to expand mail-in voting rules. The focus is on pushing back against ballot harvesting, which allows party officials and outside organisations to collect signed and sealed ballots in some states, and also against the Democrats' efforts to eliminate ballot signature match requirements and to automatically send ballots to all eligible voters.

000000
Popular comments
One of the agendas of the current system is to eventually eliminate some of its agencies. There has been many private businesses that already handle the delivery of mail and parcels of any size. I also have been noticing many businesses are only accepting exact change. This is of course another agenda of the system to eliminate money and bring up digital money or bitcoin. Let us all be aware of the bigger hidden plans behind these little things they do to distract us.
Cyrus the great
31 July 2020, 17:20 GMT2
000000
Got to remember, Trump de funded the USPS, then installed one of his cronies to muck things up more so now we have a deliberately sabotaged USPS just before elections....how convenient for Trump!