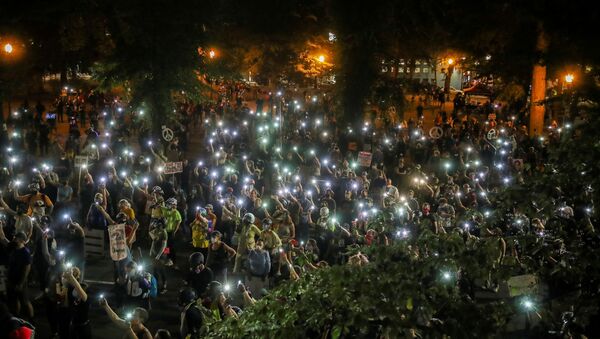 "Upon learning about the practice, Acting Secretary Wolf directed the DHS Intelligence & Analysis Directorate to immediately discontinue collecting information involving members of the press. In no way does the Acting Secretary condone this practice and he has immediately ordered an inquiry into the matter," Woltornist said.

During the previous week, the Department of Homeland Security (DHS) intelligence unit disseminated three Open Source Intelligence Reports to federal law enforcement agencies and others, summarizing tweets written by two journalists — a reporter for the New York Times and the editor in chief of the blog Lawfare — and noting they had published leaked, albeit unclassified documents about DHS operations in Portland, the Washington Post reported.

The Post cited a memo by the top DHS intelligence official, which was tweeted by the editor of Lawfare. The memo personnel relied on "FINTEL," [financial intelligence], as well as finished intelligence "Baseball cards" of arrested protesters to try to understand their motivations and plans.

Historically, military and intelligence officials have used such cards for biographical dossiers of suspected terrorists, including those targeted in lethal drone strikes.

The article also cited an internal DHS memo that was disclosed in a 28 July report coauthored by New York Times reporter Mike Baker. The memo said that camouflaged federal agents sent to put down the in Portland didn’t understand the nature of the protests they were facing.

For more than two months, protesters have besieged a federal courthouse in Portland during anti-police and anti-racism protest triggered by the 25 May death of African-American suspect George Floyd while in police protests.

The Portland protests, while peaceful during the day and early evening, typically change late at night into riots by much smaller groups who battle police with projectiles such as bricks and firecrackers in attempts to breach a barrier protecting the courthouse.