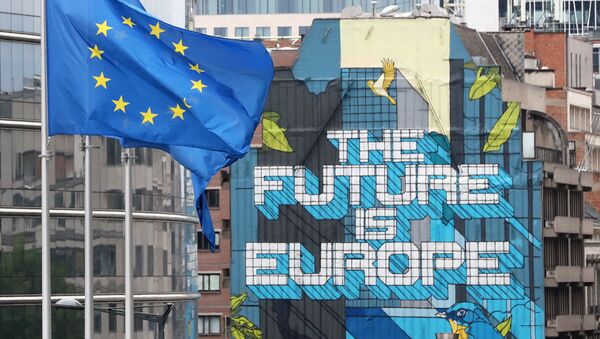 LONDON (Sputnik) - The UK authorities welcome the introduction by the EU of sanctions against citizens and companies of Russia, China and North Korea over alleged cyberattacks and intend to further implement them after the end of the transition period, the Foreign Office said in a press release on Thursday.

Earlier in the day, the European Council introduced first ever restrictive measures against six individuals and three entities of Russia, China and North Korea, which, according to the EU, are responsible for or involved in various cyberattacks. These measures include a travel ban and an asset freeze.

"The UK has welcomed today’s announcement (Thursday 30 July) that the EU has imposed sanctions against nine individuals and organisations from North Korea, China and Russia, in the first set of sanctions under the EU’s cyber sanctions regime. The UK was at the forefront of efforts to establish the EU Cyber Sanctions regime and will continue to implement this regime at the end of the Transition Period, through our own autonomous UK Cyber Sanctions regime," the press release said.

Earlier in the day, the Council of the EU announced extension for another year of the sanctions it imposed on North Korea in response to suspected research of illegal weapons. The EU has slapped 57 individuals and nine entities in North Korea with travel bans and asset freezes, on top of an UN-mandated arms embargo and a ban on exports that could contribute to the nation's weapons program. The EU's autonomous restrictive measures have been reviewed annually since they were first imposed in 2006.

The UK pulled out of the European Union on 31 January, completing a process triggered by the Brexit referendum in June 2016.

The transition period, within which the country has to renegotiate a range of agreements both with the bloc and other partners to ensure beneficial trade and cooperation, will end on 31 December.