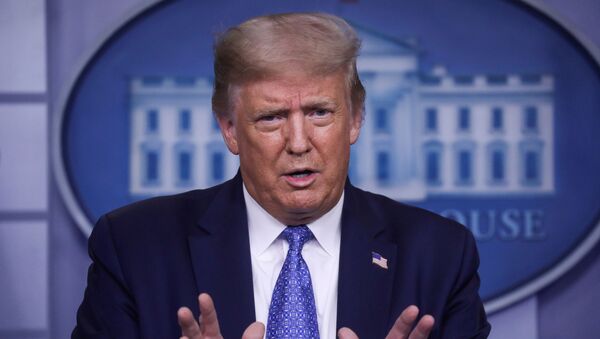 © REUTERS / Leah Millis
Subscribe
International
India
Africa
As the video in question spread on Twitter, some netizens argued that absentee voting, which Trump appears to be seen doing, is not exactly the same as mail-in voting.

While US President Donald Trump criticized the prospects of using mail-in ballots in the 2020 election, arguing that it might open the electoral process up to interference and fraud, footage from over a decade ago recently started circulating online, apparently showing Trump using an absentee ballot to vote.

According to CNN, the video in question is an "Access Hollywood" segment “filmed as Trump was attempting to vote in the 2004 election”.

The video shows Trump, after having been blocked from voting at multiple NYC locations he and host Billie Bush visit due to the former not being on any of the voter rolls, declaring his intent to “fill out the absentee ballot” and then “filling out what Bush describes as a provisional ballot in his car”, as the media outlet puts it.

Why does Trump think
he is the only one who’s allowed to vote by mail? 🤔
Hypocrisy!
#TrumpMailsItIn
By @MeidasTouch pic.twitter.com/iwHY3reFXL

​As the video spread on Twitter, with some of the posters arguing that Trump did “vote by mail”, a number of social media users argued that there's actually a difference between mail-in voting and absentee voting.

Its called ABSENTE VOTTING and its TOTALY differant!

There is a difference between mail in voting and absentee voting. Tell the truth

Are you that SLOW MENTALLY that you can NOT differentiate, “Absentee “ vote, which occurs when a U.S citizen LIVES outside HIS state, OR OUTSIDE the U.S, and mail in vote, which is a LAZY option, and leaves way more room for cheating!!!! You’re as DUMB AS YOUR NAME

He did not vote by mail , he filed an absentee ballot...I can vote by mail and I’m not even American... that what happens living six months of the year in the US.

However, there also seemed to be no shortage of netizens eager to criticize Trump on this occasion as well.

I don't care if Trump likes it or not - NOBODY is going to tell me how to vote especially this orange tool. He can bluster all he wants - he HAS NO POWER to influence established voting practices. Vote how you always have and vote EARLY!

@realDonaldTrump you trusted the system back then to accept your vote, to count your vote, not lose your vote. But today you don’t? Why’s that? Oh wait, it’s because you know you’re losing and you’re just starting to create chaos already. You’re not as bright as you think you are