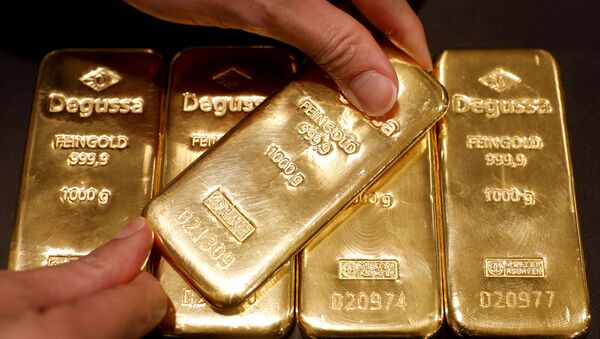 © REUTERS / Edgar Su
Subscribe
New Delhi (Sputnik): India’s gold imports have been on a steep decline in the last one year as Covid-19, and a general slowdown in the economy for months before the, have hit demand. From $8.75 billion worth of imports in April-May 2019, inflow of the commodity plunged to a mere $79.14 million in April-May this year, as per government data.

Faced with a revenue crunch amid the pandemic, the Modi government is working on a gold declaration scheme. According to sources in the Indian finance ministry, the scheme will require individuals to declare their gold assets and pay taxes on illicit stashes of gold. The scheme will help the government identify those who evaded the tax on gold purchases in the past and will help in revenue mobilisation.

A source close to the development told Sputnik on condition of anonymity, “the amnesty scheme to declare unaccounted gold holdings by individuals is being worked out. People will have to declare unaccounted gold kept in households and stashed in bank lockers during the time frame, which will be announced in the scheme. If they fail to prove the source of income from which the gold was bought, or fail to produce a receipt of the purchase, they will liable to pay taxes.”

The source also indicated that tax and fine will be slapped on those holding illicit stash of gold but opting not to make a declaration under the scheme. “If the income tax department gets to know through its own networks that a particular individual holding illegal gold stash has not come forward voluntarily, such individuals may be imposed penalty over and above taxes,” the finance ministry source added.

The scheme may be launched after COVID-19 subsides. The source also pointed out that an exemption, up to a particular threshold, will be provided to married Indian women, as brides customarily get gifts in form of gold during their marriage.

Earlier, India performed a similar exercise with unaccounted cash holdings. In a crackdown against black money, the Indian government on 8 November 2016, announced that high value currency notes of INR 1000 and INR 500 will cease to be legal tender with immediate effect. Indian citizens having these notes were asked to get the notes in the banks in lieu of new series of INR 500 and INR 2000.

Amid the pandemic, the government itself is staring at a revenue crunch in the current financial year. Against the planned revenue collection target of $60 billion from the goods and service tax in the month of April – June this year, the government has received only $18.66 billion. In fact, the central government has also told a Parliamentary Standing Committee this week that it will not be able to pay a share of revenue to the states.