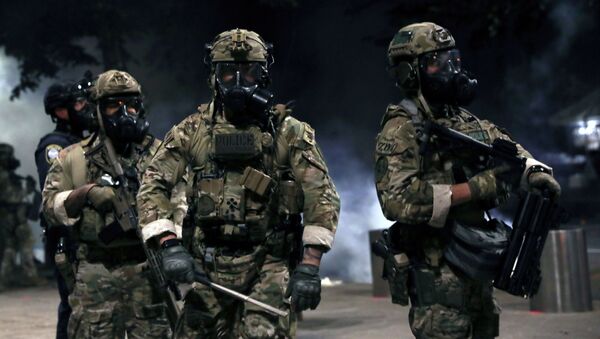 Federal agents in downtown Portland, Oregon, are reportedly being withdrawn after violent clashes between law enforcement and demonstrators. Sputnik journalist Wyatt Reed, who has been covering the Oregon protests, reported that federal police have also been targeting journalists.

Oregon Governor Kate Brown revealed on Wednesday that the Trump administration had agreed to a “phased withdrawal” of federal officers deployed at the Mark Hatfield United States Courthouse. However, reports regarding the withdrawal have been scrambled, with White House spokesperson Sarah Matthews also saying in a statement Wednesday that “as the president and [Acting] Secretary of Homeland Security [Chad] Wolf have both made clear, federal law enforcement officers will not leave until the seat of justice in Portland is secure.”

However, US President Donald Trump said at a Thursday press conference that if the Oregon State Police cannot crush the protests on their own and to the satisfaction of the federal police present, he will deploy the National Guard.

“Like yourself, [I] took it with a grain of salt and am glad in retrospect that I did, because in speaking with organizers on the ground this morning, it sounds like more of the same little bit of saying one thing and doing another,” Reed said. He is also a producer for Radio Sputnik’s By Any Means Necessary.

“So, the latest is that the protest encampment is completely, completely dispersed. This morning, apparently another sort of joint operation here between the Portland Police Bureau and the federal agents, the encampment was completely surrounded on basically all sides. Streets were blocked off. They gave an announcement saying that all people, including media, had to leave within 10 minutes. Then they immediately set to work, just destroying and throwing away all the property in the encampment,” Reed said.

“Most people elected not to be arrested, which I think is fairly predictable. It’s the choice that I would have made - and in fact, the choice I did make when being harassed by these federal agents on various occasions, to have to kind of deescalate the situation, not really do my full journalistic duties, because I didn’t want to be subject to arbitrary arrest,” Reed added.

On July 23, US District Judge Michael H. Simon issued a temporary restraining order on officers for the US Department of Homeland Security and the US Marshals Service in Portland, similar to the restriction he placed on local police earlier in the month, according to Oregon Public Broadcasting.

The injunction, which limits the force officers can use against journalists and legal observers, came after a lawsuit was filed by the American Civil Liberties Union (ACLU) in Oregon claiming that law enforcement officers in Portland have been arresting journalists at protests over the killing of George Floyd in the hands of Minneapolis, Minnesota, police since late May.

​In addition to arresting journalists, law enforcement officers in Portland have been accused of firing rubber bullets at, tear-gassing and beating journalists and legal observers with batons at the protests, according to the ACLU lawsuit.

“The night that that injunction went into effect, it was about a half dozen journalists, including myself, who were targeted. So, I think one thing changed: they took it as a bit of challenge to their power and to their handling of the situation, and they had a very clear message in response. And that was, ‘We are going to continue to do what we want and treat everyone in the vicinity of this courthouse as we want, and there’s not much you can do about it,’” Reed explained.

“My dad volunteered and served in World War II to fight fascism, like most of my uncles, so we would not have an American president brutalizing and kidnapping Americans for exercising their constitutional rights and trying to make America a better place, which is what patriots do,” Krasner said in a statement last week. “Anyone, including federal law enforcement, who unlawfully assaults and kidnaps people will face criminal charges from my office.”

“I can’t guarantee that he [Krasner] would follow through on this, but certainly even just making that kind of statement, putting it out on the record, is something I think we could stand to see more democratic, elected officials doing,” Reed noted.

Reed asked Portland Mayor Ted Wheeler if he would commit to doing something similar after his widely publicized speech to protesters last week.

​“At first, he kind of brushed it aside,” Reed recalled. “He said there's already an investigation going. I pushed him on it, and he said, ‘Well, feds who kidnap people, hell yes, we’ll arrest them,’” he added, noting that the mayor did not comment further on the matter when queried about federal arrests that have already happened in the city.

“There’s a clear sort of lack of backbone, willingness to confront the local police and the federal agents in any but a rhetorical sense, and I think we’re seeing that played out right now as we see this kind of attempted, managed dispersal of the protesters. But from what I’m hearing from the protesters, they’re not planning on going anywhere,” Reed continued.

“Protesters are not out here hoping to win control of the government from Donald Trump. They are out here demanding real, meaningful changes to reflect the fact that Black lives matter - not just lip service from different elected officials,” Reed explained.